BACK TO THE SMOKY SKIES OF SEATTLE

Wherever we went in Ireland, everything seemed washed clean by the ubiquitous low clouds and rain. There were sun breaks, and when those occurred the sky was as clear and blue as anywhere, but it never really warmed up. Most telling was Michael’s comment one day that “it would be nice to come back here in the summer”. I had to point out to him that it was summer.

After a surreal return flight that took a total of about 20 hours because of British Airways re-booking our flight on an itinerary that involved an excruciatingly long layover in Heathrow, it was with some relief that I was able to shed the multiple layers of clothing that I’d been wearing and enjoy what’s left of our summer. There’s not a cloud in the sky, but it’s not the bright blue sky that I was expecting. 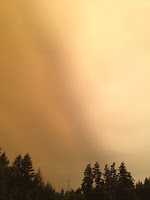 Since we’ve been back, the sky has been an ugly yellow-brown color due to the big wildfires that are burning east of here. Yesterday the map showed at least a dozen fires, and today there are more. When I go outside this morning, there’s a strong smell of smoke, the intensity of which has increased since last night.  Houses and buildings have burned, and several firefighters have died.

It’s not unusual to have wildfires in the late summer, but the magnitude of the fires this year is unusual due to the drought. The new smell of summer in Seattle seems to be smoke.

[Photos from various news sources. I would take some photos, but can’t download them from my camera or phone until my laptop undergoes some more treatments for what ails it.]
Posted by Ellen at 12:19 PM