WHITE CATTLEYA: THE CHALLENGE OF USING LEMON IN PERFUME 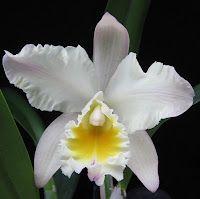 Cattleya orchids with flowers in the white-to-green range often have a citrusy scent that’s heavy on lemon notes, so one of my latest challenges has been trying to recreate the scent of a white hybrid cattleya orchid. I’m getting there, but on the way I’ve struggled with the difficulties of using lemon as a perfume note. Unfortunately lemon has been ruined by its gross overuse in functional fragrances for cleaning supplies, almost to the extent that it evokes a conditioned knee-jerk response of “cleaning product” even if it’s in a context that has nothing to do with cleaning, like lemonade, lemon desserts, lemon candies, or lemony colognes. In fact, there are commercial “lemonade” drinks that taste like they’re flavored with the same aroma chemicals that are used in cleaning supplies, further blurring the lines between fruit, food, beverages, detergents, and perfume. 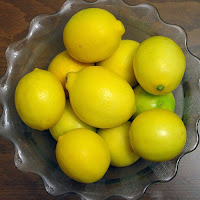 Instead of the standard lemon rind essential oil, I started with an essential oil made from the whole fruit, which has a gentler and sweeter scent, along with a little citron. Natural lemon on its own is a top note, so I added some other materials like lemonile that enhance it and make it last well into the middle section of the scent, if not the end. The goal is for it so smell something like an orchid, so there’s plenty of vanilla in the base. After looking at published analyses of orchid flower fragrances, which are all over the place even for cattleyas, I chose a few materials that are in a lot of flowers’ fragrances, like citronellol, linalool, nerolidol and others. Citronellol and phenylethyl alcohol in particular helped “floralize” the lemon, so the heart of the perfume is not all that lemony, but includes other fruity-floral orchid-type notes. The base also contains some light, high-end musks. Combining lemon with common “laundry musk” would automatically evoke the image of detergent, so the musk component  had to be done some other way, using materials like cosmone, velvione, muscenone, and others of their type.

In analyses of orchid flower headspaces, one commonly encountered substance is beta-ocimene, a simple terpene-type molecule that until now hasn’t been commercially available, at least not to small-scale perfumers. I finally managed to get some, and added it to the white cattleya. It gives the whole composition a very natural, fresh feeling, adding the same kind of sparkle that aldehydes are known for. I’m still working on the formula, but when I return to Seattle on August 20, I’ll send out samples to my testers so that I can get feedback. It’s not quite finished, but it’s getting there.

[Lemons and Rhyncholaelia digbyana photos from Wikimedia; white hybrid cattleya photo is mine.]
Posted by Ellen at 4:21 PM