Having grown up in places where houses, apartment buildings, shops, and all other buildings are entered straight from the street, I never cease to be mystified by the peculiar design of entrances in suburban areas of the US. The dysfunctional design principles dictated by the use of automobiles to travel everywhere really struck me one day when I observed a local thoroughfare where old buildings had been torn down and the entire area rebuilt to look like an urban street lined with shops, complete with sidewalks, but with no visible entrances to any of the shops. Instead, the street was lined with fake facades disguising what was really a strip-mall with entrances from a big parking lot on the other side. I wrote about this abomination in another post.

The area where we live, just north of Seattle, is an odd mix of rural and suburban. However, a common theme that I’ve noticed is that the entrance to almost every house or building is not the main feature and is reached by traversing a right angle turn to get to the front door. I think this strange design comes from the practice of having a garage as a prominent part of the house, with a big driveway leading to one or more garage doors that take up most of the front façade. I think the original architectural assumption was that people would drive their car into the garage and enter the house from the inside of the garage, with the front door mostly serving as vestigial decoration. 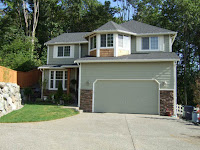 At some point decades ago this plan went awry when people discovered that the highest and best use of the extra space provided by the garage (or garages!) was not housing for vehicles, but better served as a recreational area, workshop, extra bedroom or (in most cases) storage for junk of various sorts. This means that cars are parked in the driveway or along the street, and the occupants of the house must either traverse the awkward right angle walkway to enter the front door or forge a new path across the contractor-installed lawn. 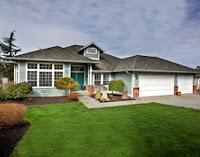 It is the nature of every living being to take the shortest, easiest, distance between two points unless there is some compelling reason to take a detour. That is why, on campus, the more independent-minded students (and faculty) create their own paths to circumvent the designers’ attempts to make them walk awkward, right-angled routes that probably looked beautifully symmetrical on paper. In some cases the “cowpaths” that have evolved are eventually sanctioned with rough paving, and in other cases they remain dirt tracks. 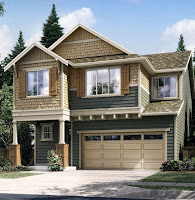 If you look at nature, you hardly ever see a right angle, except where plants and trees grow vertically from flat ground. The right angle is a human invention to facilitate joining materials used in building. It’s natural to take a right-angled path around the corner of a rectangular building, but it’s something else to be expected to walk at right angles when nothing stands in the way of walking in a straight line. It also seems unfriendly to expect guests to walk down a driveway that may be clogged with vehicles and then take a right-angled turn to reach a half-hidden door, as if a door were something scandalous that needs to be concealed. Why not construct a direct path to the door?

[All photos from local real estate sites. It is interesting that these "glamour" photos are always taken in such a way that the garage is emphasized and the front door is completely or partially concealed. Of course, no cars are ever in the driveway, and the street is never shown.]
Posted by Ellen at 1:18 PM