THE EXPERIENCE AND THE ARTIFACT + A GIVEAWAY

Today, as a special Monday treat, we have a post from Azar along with an unusual giveaway.
----------------------------
A few years ago, several on-line self help magazines, as well as various consumer psychology journals, were pushing the notion that the best way to be happy and enjoy life was to accumulate positive experiences (e.g. vacations) rather than possessions. Recently a number of psychologists have modified this stance to include purchases that facilitate good experiences  (experiential products). Ever the skeptic, I tend to suspect that any article referencing consumer psychology is nothing more than a sneaky way to sell me something, like a trip to Bali or another guitar. But what does this have to do with perfume? 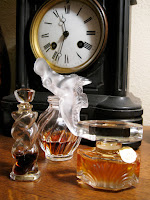 When we buy a bottle of perfume we are obviously not just buying the bottle, however elegantly simple or gorgeously ornate it might be.  We are purchasing days and sometimes decades of fragrant experiences.  When the jus is gone we can chose to save the experience and the artifact!

Even though I don’t go out of my way to collect perfume bottles I have, over the years, accumulated a nice little stash of vintage commercial bottles as well as several hand blown originals. Just the other day I spotted three partially full, mid-20th century perfumes on e-bay for  $18 total. They appeared to be in perfect condition and the largest looked like a Lalique.  I was the only bidder and was thrilled when the bottles arrived, better than described. My three lovely treasures were in perfect condition, except that the glass stoppers were seriously frozen in place. 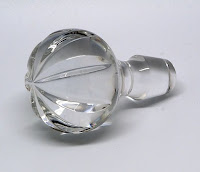 If I were simply a collector of artifacts I would have put my new acquisitions on display to enjoy as possessions. But, as a collector of experiences, I felt compelled to release the long imprisoned djinni from each bottle.  I knew that this could be risky business but I had to give it a try.

When a ground glass perfume stopper is stuck in a bottle it is essentially "glued" in place by old, dried residue that has been forced into the ground stopper time and again by repeated expansions of the glass.  I have had some success loosening stoppers by using a few drops of perfumer's alcohol around the edge to dissolve the "glue".  I gave this method a try but nothing moved.  Next I tried three drops of fractionated coconut oil and waited twenty minutes.  The idea was that the oil would seep down the stoppers and loosen them by lubrication.  Once again, I had no success.  It was time to risk the freezer.

When ground glass stoppers (primed with fractionated coconut oil) and polished glass bottles are quickly cooled they seem to contract at different rates.  After thirty minutes I removed the bottles from the freezer, gave each stopper a little jiggle and heard a satisfying pop and hiss.  The 50-year-old seals were broken. The perfume djinnis quickly escaped into a new century.  Not only were the old fragrances in near perfect condition there was also no damage to the stoppers or bottles.  A most satisfying experience!

Here are a couple of questions, dear readers:  How do you remove frozen stoppers from perfume bottles?  Do you have a memorable perfume-related experience to share?  Answer either of these and be entered into a drawing for the sweet, little empty 1 oz. Evyan Golden Shadows bottle, circa 1940, pictured above. The drawing will be next Monday, February 1.