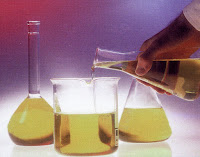 How to start a series on perfumery raw materials? I suppose I could just dive in and consider individual materials one by one, but somehow it makes more sense to first consider materials by broad category rather than individually. I think everyone is at least vaguely aware that materials can be of different types, but may not realize the advantages and limitations of each type of raw material. So here goes with the most general classification possible. 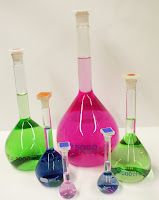 Single Molecules. Chemically speaking, these are the simplest and most basic of all materials in that they are composed of a single type of molecule, such as phenyl ethyl acetate, amyl salicylate, or vanillin. Molecules with long, unwieldy names like (5E)-3-methylcyclopentadec-5-en-1-one are often given semi-descriptive trade names like Muscenone. Although different versions of an aroma molecule share the same chemical formula, the material itself may consist of different structural isomers (same chemical formula but different arrangement of atoms) or different stereoisomers (same formula and arrangement of atoms, but rotated in different ways). A given material may be a single isomer or a mixture of isomers, conferring different olfactory properties. The advantage of using single molecules is that the perfumer knows almost exactly what is going into the formula, common aroma chemicals are readily available in bulk, and they are usually easy to work with. For the beginning perfumer, probably the biggest down side of aroma chemicals is that there may be no real-world equivalents for their odors, so the properties of each one have to be learned from scratch. 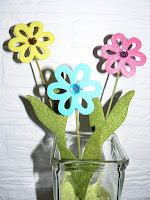 Synthetic accords or bases. These are mixtures of aroma chemicals that, together replicate a complex natural scent such as rose, gardenia, or oud, or a fantasy scent such as “ambrosia” or “clean underwear”. Many bases of this type are available commercially as convenient ready-made components to use in perfumery. They are not the same as the “fragrance oils” that are commonly sold to hobbyists as functional scents for soap, candles, and lotions. The latter are some sort of odorant mix that approximates a complete perfume, diluted in a carrier oil, whereas perfume bases are the pure aroma chemical formula meant to be used as a building block, not a finished fragrance. 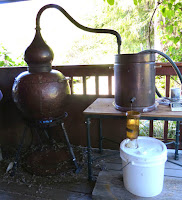 Naturals. These are the essential oils, absolutes, tinctures, and other materials derived from plants (and occasionally animals or minerals) that most self-taught perfumers start experimenting with in the beginning. The advantage of natural materials is that their names generally indicate what they will smell like, and most of them have familiar, “real-world” smells. Most natural materials consist of a large number of very different molecules that, together, produce the familiar smell, so are actually complete perfumes or accords in and of themselves. The advantage of using naturals is that they can be readily understood and easily impart complexity to a blend. The down side is that the very complexity that makes them attractive can lead to unwanted interactions and “muddying” of a blend if too many are combined in the wrong proportions. 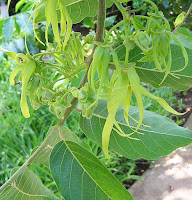 Another disadvantage is that naturals from different sources may smell very different, and the same material from the same supplier may smell different from batch to batch, and availability depends on crop yields, international politics, and many other unpredictable factors. A lot of naturals are difficult to work with in that they are sticky, gooey, lumpy, or otherwise nasty in consistency. They have to be melted, diluted, tinctured, or otherwise processed before they are usable, and the final formula often ends up cloudy so that it requires fining and filtering before it is clear enough to sell.

Mixed accords. These are like synthetic accords except that the desired smell has been created by combining naturals and aroma chemicals.

I think the majority of perfumers work with all of the above types of materials unless they are solidly in the all-natural category.

[All photos are from Wikimedia except for the alembic still, which is mine.]