When writing about the Cymbopogons last week, I should have mentioned my old post on Cymbopogon validus, aka African bluegrass, yet another one of the grasses that yield perfumery materials. It’s an excellent material that is hardly ever used, but it’s in a few of my perfume formulas, especially the Devil Scent series. The oil gets better with age, as I found out after getting a new batch that smelled “raw”.  It needs to sit for a year or more to mellow, so I’ll always have one bottle to use and one to age.

I thought about where to go from the Cymbopogons, and decided to stick with the “green” theme until I exhaust it. 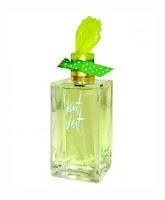 One natural material that’s always thought of as “green” is galbanum, although I think that reputation comes from the fact that it is often combined with other “green” materials, as in the famous Balmain Vent Vert, which dates back to the mid 1940s.  Incidentally, I just obtained a vintage Vent Vert mini from the 1950s or early 60s, and it smells absolutely amazing, nothing like the current version.

Galbanum comes from a plant that looks like a giant fennel plant, Ferula galbaniflua  (also called Ferula gummosa), native to Iran and other parts of the Middle East. The galbanum essential oil I have comes from Turkey. The essential oil is distilled from a resin exuded from cracks in the mature stems of the plant. For many thousands of years galbanum has been burned as incense, so it has a long history of use in scent-making. To me, galbanum essential oil smells more bitter-resinous than green, so it’s useful for giving scents a bitter-woody, almost mineral-like note that lasts pretty much throughout. I have heard the scent of galbanum described as being like old cigarette ashes, and I can sort of see their point, but it’s cleaner. It would be a good addition to any perfume that aimed to recreate a landscape with semi-dry grass, bark, and stones. I don’t know why I don’t use it more because, wearing pure galbanum oil, I really like it. 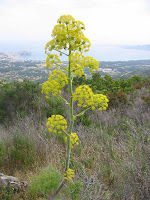 Ferula asafoetida is a relative of galbanum, but with a different scent entirely, made from the sap exuded by the root of the plant, which also looks like a giant version of fennel. The smell of the resin is completely unique, and is used mainly in Indian cuisine, where it is known as “hing”, and in Ayurvedic medicine for a variety of purposes. I like to use hing in cooking, partly because I like the flavor and partly because it enhances the effect of other spices. There is an essential oil of asafetida, but its use in perfume is extremely limited. I tried to use it in one perfume, in extremely diluted form, but no matter how little I added it ended up hijacking the fragrance and I gave up. I may give it another go at some point, but for now the oil is sequestered in a double plastic bag to prevent it spreading to other things.

Do you like galbanum as a perfume note and, if so, what is your favorite scent that contains galbanum?
Posted by Ellen at 12:09 PM