SCENTS OF GRASS: THE CYMBOPOGONS 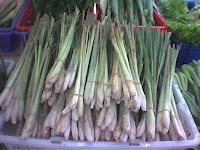 Last week’s materials post was on vetiver, so this week’s will continue with three related grasses that are used in perfumery and other aromatic applications, Cymbopogon citratus (lemongrass) Cymbopogon nardus (citronella) and Cymbopogon martini (palmarosa). Like vetiver, these are all in the grass family, growing as big clumps, but for the Cymbopogons, the essential oil is derived from the tops of the plants, not the roots. All of these species were probably originally native to India and/or Southeast Asia, but have become widespread throughout warm parts of the world due to culinary and agricultural uses. 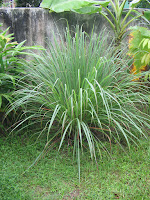 Lemongrass is most commonly thought of as a food flavoring due to its extensive use in Asian cuisine. Lemongrass oil is obtained by distillation of the green parts of the plant, with most of the aroma contained in the base rather than the outer parts of the leaves. I think of lemongrass imparting a delicate flavor to Vietnamese cuisine, and working well with coconut-based curries. The essential oil contains citral, limonene, citronellol, geraniol, and many other molecules that have insecticidal properties and mosquito-repellant properties, as well as medicinal properties, especially anti-inflammatory and anti-fungal activity. 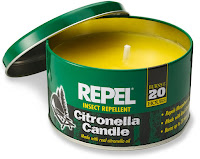 Lemongrass essential oil has a characteristic, unmistakable top to mid-range scent that can be quite heavy, strong, and overpowering if used in perfumery, so needs dosing with a light hand and with the proper accompaniments. Given that most of the lemongrass constituents, and all of the main ones, are available as pure aromachemicals (that’s for another post!) the perfumer has the option of creating a unique “lemongrass” accord to use, or choose which aspect of it to emphasize in a blend.  I used lemongrass essential oil in Kyphi, but I think if I used it in another blend I might opt for a lighter reconstruction that’s more like the flavor one gets in delicate lemongrass-flavored cuisine.

Citronella, the evil cousin of lemongrass, contains large quantities of citronellal, citronellol, geranial, limonene and other “lemony” molecules. It is an important source of these and other isolated aroma chemical molecules. Like others of its genus, it looks like a small clump of pampas grass, not a very attractive sight. Perhaps the best known use of citronella is as an insect repellant, with citronella candles traditionally burned to keep mosquitoes away from outdoor gatherings and to scent insecticidal sprays. Because of this association, in my opinion, citronella does not work well in perfumery. Who wants a perfume that smells like bug spray? Having said that, the aroma molecules obtained from citronella have a multitude of uses in perfumery, and are probably present to some degree in the majority of perfumes. 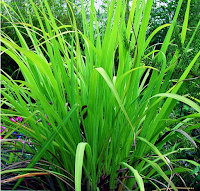 Palmarosa is yet another one of those plants that looks like pampas grass. The green part of the plant is distilled once it has flowered,, but plants can live for many years, regrowing the parts cut for distillation. The essential oil contains mostly geraniol and geranyl acetate, along with linalool, myrcene, farnesine, and ocimene. As in the case of other essential oils, the reported percent of constituents, and the constituent profile itself varies depending on whose publication you read. Apparently the composition differs depending on which part of the plant is used, and I’m sure it also varies by season, harvesting techniques, and distillation techniques. 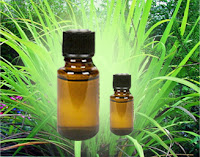 Palmarosa essential oil smells sort of like a mixture of rose geranium and lemongrass, not too surprising given that it’s a Cymbopogon. It seems a little sharp and raw by itself, and I have not used it in a perfume. I can see how it could work as an excellent substitute for rose geranium. However, I can’t see how it would work as a substitute for rose, although it seems that it has commonly been used to adulterate rose oil or absolute. It is reported to have antiseptic properties and to be very good for the skin, with “anti-aging” properties. I’ll have to try it in my formula.