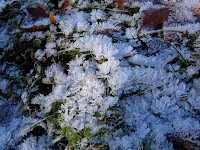 Ice flowers - the odd and intricate ice crystal formations that appeared on the ground last winter after a hard rain and the arrival of a cold front with very low (for here) temperatures. I’ve never seen anything like these perfect roses chiseled out of ice, before or since. They were not delicate snowflakes, they were almost the size of real roses! I photographed them and tried to imagine what an ice flower would smell like. Nothing flowery or plant-like, that’s for certain. This perfume is a big departure for me, since I set out to make a formula that was entirely synthetic. I almost succeeded, but at the end I tweaked it with some naturals, galbanum and black pepper, to give it the edgy top notes that I thought it needed. Fair enough. I tweak most of my natural compositions with synthetics, so why not do the opposite? 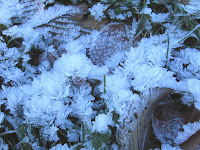 I tried to keep it simple, with an opening that is sharp and pungent, like the pointed, knifelike edges of ice crystals or the points of snowflakes. As it dries down and the top notes disappear, it becomes a haunting, synthetic flower scent, not at all sweet and not identifiable as any real flower. At the end, the flowers melt into a soft and frothy base, like a light sherbet. Because the scent is mostly synthetic, it has great sillage and longevity. It’s probably not for everybody.

I’ve become addicted to my own creation and have been wearing it (in all of its versions) more than any of my other scents. It seems to work as a “palate-cleanser” after I’ve sampled other perfumes that are heavy and floral.

I’ll be giving away two 5-ml samples of the current version of Fleurs de Glace to the first two people who post here and express an interest in trying it.
Posted by Doc Elly at 8:17 AM