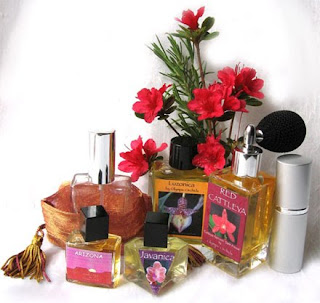 I thought it would be good to start today's post with a little bit of information about the orchid whose photo is shown in yesterday's post. One of my favorite hybrid orchids is Laeliocattleya Netrasiri. This plant is not much to look at in the summer, just a bunch of big, sprawling, succulent stems and leaves, but it miraculously bursts into bloom every year around the winter solstice with a profusion of velvety dark red flowers that are intensely fragrant. There is nothing better than these flowers to brighten up the dark, cold, rainy days of a Pacific Northwest winter. Goodbye, seasonal affective disorder! Hello tropical jungle!

Cattleya orchids are the kind that used to be used for the orchid corsages that were popular in the early to mid 20th century. Most of the orchids grown for corsage flowers were lavender or white, but cattleyas come in every imaginable color. Because they are pollinated by day-flying bees and butterflies, they are not only colorful, but emit wonderful fragrances that are strongest in the early part of the day. A few will switch to a totally different scent at night, but that’s a story for another time.

Red Cattleya was the second orchid fragrance that I attempted to formulate. The first orchid fragrance that I made was fairly simple, so I thought the scent of Red Cattleya would be just as easy to duplicate. Nothing could have been further from the truth. Most cattleyas have a characteristic soft, moist, floral, slightly fruity fragrance, but it is extremely elusive. It took many attempts to produce something that resembled the actual flower and was also wearable as a perfume. When I finally had a formula that seemed close, I considered it a major triumph. An especially nice feature of the formula that I finally came up with is that it works equally well in perfume or soap.

In terms of the scent, Red Cattleya has been described by those who have tried it as like walking into a hothouse packed with the most exotic orchid species, originally brought back by explorers from jungles all over the world. The blooming cattleyas envelop you with a cloud of soft, sumptuous fruity-floral fragrance that is incredibly sexy. The perfume notes include citrus, spices, peach, apricot, hyacinth, gardenia, violets and lilac. At the base is a dark current of musk, exotic woods and vanilla. This perfume was released for local sale in December 2009, and will be one of the signature Orchid Scents available on the website.

Watch for the upcoming orchid fragrance contest and post a comment for a chance to win a Red Cattleya gift set!
Posted by Doc Elly at 8:54 AM