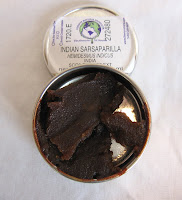 One of the items that came in my latest shipment of natural perfumery materials was the SCO2 extract of Indian sarsaparilla. There are many different herbs that go under the name “sarsaparilla”. Hemidesmus indicus, also called “Indian sarsaparilla” is different from the ones traditionally used to flavor root beer or sarsaparilla, which belong to the genus Smilax. Hemidesmus indicus is a small perennial shrub that grows throughout nearly all of the Indian subcontinent. The roots are the part used to make the aromatic extract. Like Smilax, it is traditionally used as a tea or flavoring for medicines, cold drinks, and sherbet.

It was surprising to me that a search turned up almost nothing regarding the use of this plant extract in perfumery. However, there is a wealth of information about its medical uses. In Ayurvedic medicine it seems to have been used to treat just about every ailment that can be imagined, from skin diseases to fevers, arthritis, syphilis and the bites of poisonous snakes and scorpions. It is also reputed to be an aphrodisiac. This I can well imagine after smelling it.

When I first opened up the little silver tin that it came in, I was blown away by its sweet and heady smell reminiscent of rum-laced eggnog and vanilla flavored baked goods, only better. It is supposed to contain some of the same constituents as tonka beans, hence the vanilla-like note, but it contains many other aromatic compounds as well, making the scent unique.

Of course the wheels in my brain are turning, thinking about how to showcase this wonderful natural material in a perfume. After reading about it, however, I realize that this is one of those plants that, like sandalwood, run the risk of overharvesting natural populations and eventually being wiped out. Unless Indian sarsaparilla starts being cultivated commercially, I wouldn’t feel right using it in a perfume that was part of my permanent line, but now that I have a small amount of it, I will want to share it as a limited edition natural scent so that others can experience this fantastic creation of nature. Stay tuned for updates on the formulation of a new perfume using Hemidesmus indicus as the keynote material.

Unfortunately, there are quite a few natural materials that could be put in the sad category of “smell it now, before it goes extinct”. I don't want to get started on this topic, so will save it for another day.
Posted by Doc Elly at 9:10 AM