For the last several months my local supermarket has been undergoing renovations. Instead of closing the place for a few weeks and letting the workers do what they need to do, they go section by section, aisle by aisle, moving things around and closing departments temporarily. Yesterday when I was in there to buy fish, my patience came to an end when I found that the fish department was closed. An employee working nearby said that the renovations would continue until October - four more months of disruption.

I asked the depressed and apathetic-looking young girl at the checkout why the renovations were necessary - it looked like they were purely cosmetic and were doing nothing to improve the functionality of the space. I suggested that the fat cats in charge could have left the store as it was and paid her more so that I could have a smiling face to interact with at the checkout. Her reaction was one of bewilderment - I don’t think she understood the concept of prioritizing how money is spent - and her response was that the store was “too old” and remarked on how nice it would look when it was finished. Too old? They just went through the same process of renovation about 6 or 7 years ago. My response to her was, “Too old? One of these days you will be too old. Does it happen at 25? 30? 35? When will you be too old?” She actually blushed. I’m not sure why. Maybe our exchange made her think a little and it was a sudden rush of blood to fuel an inactive brain. I would like to think so. 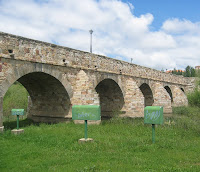 The whole concept of being “too old” is sadly a part of our society. If a building is more than 50 years old, tear it down. If your refrigerator isn’t this year’s trendy color, send it to the dump and buy a new one. If your perfume isn’t the latest celebrity scent, throw it away. But what about the Parthenon? The 2000-year old Roman bridge in the photo? The Sistine Chapel? Picasso’s Guernica? Jean Patou’s Adieu Sagesse? Aren’t they all “too old”? Shouldn’t they be replaced with new, disposable buildings or art works, or at least renovated with the latest surface treatment? This set me to thinking about the role of quality in making things ageless, and how our society doesn’t strive for quality, but rather for the disposability that keeps consumers replacing goods all the time.

Why do we not try to produce quality creations in the hope that some of the fittest and luckiest examples will survive and still be as attractive and functional after 50, 100, 500 or 1000 years as they were when they were first made? Why do we not try to be “quality” people, so that we will never be “too old” as long as we live? Am I starting to sound like Phaedrus in Zen and the Art of Motorcycle Maintenance, ending up ranting in a corner?

The final touch of irony will be when the renovations in the supermarket turn out to be designed to make it look more like an old mom and pop market.
Posted by Doc Elly at 9:56 AM