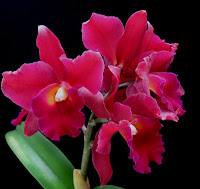 The red hybrid cattleya that I used as an inspiration for a perfume and wrote about back in May is blooming again, bigger and better than ever. This year it seemed really anxious to bloom, with the buds bursting open in mid-October. The first year it bloomed, it had one flower, the second two, the third three, the fourth five. Now, in its fifth blooming, it has seven perfect flowers. Saturday morning the red cattleya went with me to Ciscoe Morris’s radio show on gardening, where I was discussing orchid growing. It has been building up its fragrance over the past week, and that morning it was in fine form, first perfuming my car and then the whole studio. It was almost as if it wanted to show off.

When the flowers first opened, they didn’t have much scent for the first couple of days. Then they developed a strong indolic note, and today they have the spicy, fruity, floral, bubble-gum scent that I find characteristic of this plant, although the indole lingers on as an undercurrent. It’s really interesting to see how the scent changes as the flower matures. I think this hybrid, Lc Netrasiri, is my all-time favorite Cattleya. 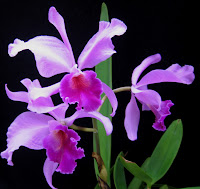 The other fragrant cattleya that’s blooming this week is the species Cattleya jenmannii. This is the first year it’s bloomed, but it already has three large flowers that are pretty much along the lines of an old-fashioned “corsage orchid” in both shape and color, just a little darker. This plant was not well-behaved, growing out of its own pot and into the pot of its neighbor, where it seems to be inextricably intertwined with a Cattleya intermedia. That’s what I get for not providing enough supervision.

When the jenmannii flowers first opened, they also took a few days to start producing fragrance and had a strong indolic note in the beginning. They have now mellowed out to a spicy, fruity, floral, bubblegum scent that’s similar to the red cattleya, but a little softer and sweeter, with gentle notes of iris and carnation.

For some reason, the red cattleya is extra-spicy this year, since I seem to recall that it’s been more like the jenmannii in past years. I’ve noticed with other orchids that their fragrance can vary a bit from year to year, as can their flower color, depending on growing conditions.
Posted by Doc Elly at 10:23 PM