I mentioned the other day that I had received an e-mail from an anonymous customer requesting a bespoke perfume. Whoever it is certainly has some lofty goals in life as well as some interesting and definite ideas about what he wants. Since he presented the brief as a challenge, almost a sport, how could I not take it on? 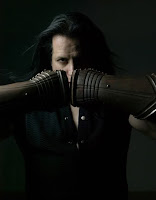 He included a photograph, presumably so that I could match the perfume to his appearance, but that won’t be easy since he seems to be concealing most of his face. Somehow I suspect that he’s in the habit of constantly creating himself as a fictional character to conceal his true identity. Regardless of whatever neuroses this customer may have, here’s the brief:
-------------------------------

I need…a perfume. Perfume is one of the things she lives for, one of the reasons she loves to breathe.
I want it to be unlike anything you've ever made. I want it to be dark, bitter, otherworldly. A lot of base, a lot of bass. I want it to unnerve and surprise her. I want her to say 'yes'.
I want you to think for a moment about ‘sin’. Think about something…forbidden, something taboo. Something subversive, which makes it seductive and alluring, almost by default.
What is the ultimate human taboo in terms of scent? It’s your ultimate dirty secret, the very secret you use your perfumes to conceal and hide or on the other hand, accentuate:
You’re animals underneath it all. With animal appetites, animal urges you try to ignore, suppress, hide and deny at your peril. Or animal appetites you want to advertise, just not in so many words.
The very kind I embody, or so you think.
What would I be as a human animal? I’m the Devil, so they’ve said. Neither animal nor human but a combination of both, just enough of each of them to be dangerous, and that’s the whole idea. Danger. I want her to be able to know exactly who I am by her sense of smell alone.

So – the perfume. Now, I love frankincense, I love it for that sense of sanctity it implies, for that mood of contemplation it creates. I love it because it’s outside of time, just like me. Boswellia neglecta, and a touch of Boswellia serrata, too, and labdanum. Labdanum is a note she loves, labdanum is animal and sexy and slightly goatish. Perfect. She loves galbanum and cinnamon leaf. Castoreum? Civet? Civet is sweeter and sexier than musk I’ve always thought, but that’s your business, to think this out for me.
Dangerous, remember? This is part of my bait, the part of my bait that I hope she bites. I have a feeling that she will surprise me, and trust me, not too much does any more.

I want you, my chosen perfumer, to surprise me. Think dark, think sacred, think bitter, think…just the slightest bit overpowering, the kind that breaks down resistance.
The kind that will make her take the bait.
I told you. I want her to say ‘yes’. I want you to create a perfume for me that makes sure she does.
Are you up to that challenge? Do you think you can do it? Do you think you can surprise me, too?

So there you have it, folks. This is going to be quite a project.
Posted by Doc Elly at 11:33 AM