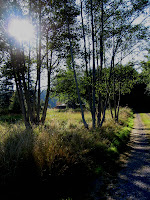 This April was completely screwed up with two trips in rapid succession, the coldest spring weather on record, and two theatre productions sandwiched between the trips. May is beginning much more auspiciously. The sun has finally appeared and all of a sudden it’s warm enough to wear shorts, go barefoot, and open a window on the south side of the house. The orchids are all in their growth spurt, the bamboo is shooting up, the fruit trees are blooming, and the bees are buzzing around. I just put the shade cloth over the greenhouse, and our next-door neighbors are getting married today.

What I don’t understand is how time goes by so fast. It seems like it was just New Years, and now it’s almost summer. Maybe time passes faster as we get older. Maybe I’ve taken on so many different things that I’m always racing and juggling to keep up with them. Maybe it’s both. 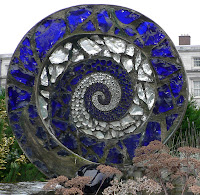 One of my most memorable dreams was an allegory for this ever-faster life-pattern. In the dream, I was going through a spiral shell-like structure, starting at the center. It took the same amount of time to go through each round of the spiral even though they became progressively larger, and each one was filled with more and more interesting and exciting things. The pace became faster and faster until at the end I was sucked along so fast that I finally escaped the gravity at the center and spun out into space through the end of the shell. Suddenly I was just floating aimlessly in a calm, empty dark place. I think this is one of several dreams I’ve had in which I died.

I was thinking about this old dream this morning as I resolved to do better in keeping up with the blog in May. It’s one of the things I really enjoy, so maybe I’ll find something else to let go.

[Photo of spiral sculpture at Dublin Castle adapted from Wikimedia]
Posted by Doc Elly at 10:07 AM