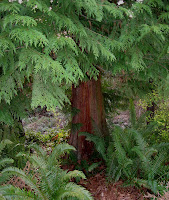 March is almost over and it’s still cold and rainy. Over the last two weeks everyone in the world (well, the US, anyway) decided to order orchid plants, so I spent an entire weekend literally doing nothing but pack plants to ship. At the same time I had some more major deadlines at my regular work, one of which culminated in a long teleconference today. I’m involved with two shows that open next month, and I really need to get back to perfumery things.

I think this post is mostly just a guest appearance to reassure readers that I haven’t been abducted by any mystery perfume customers, and that I will be back blogging regularly after the road trip to Oregon that we’re taking next week. I’m not taking my computer with me, so will be without technology for a week - a real vacation. One of the things we’ll probably do is go hiking through some of the forests, and when we do, I’ll be seeing the trees with new eyes and sniffing them with new nostrils. 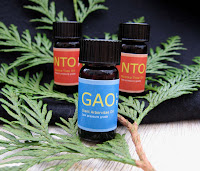 A while back I got three samples of essential oils from a new company in Canada called “Northwest Aromatics” that’s in the business of extracting essential oils from wood scraps left over from the lumber business. Two of them are slight variations on what they call “Nootka Tree Oil”, which comes from the Nootka cypress (aka Alaska cedar, yellow cedar, yellow cypress), Callitropsis nootkatensis. Both of the nootka oils have a cedary scent, like pencil shavings with earthy, flinty, notes and sweet aromatic notes. They will make a nice addition to my collection of different “cedar” oils.

The third oil is called “Giant Arborvitae” oil, which comes from Thuja plicata, or western red cedar. When I ordered these samples, little did I know that the giant arborvitae oil came from the very species of tree that grows right outside my window. I’m still trying to decide whether that enhances the mystique or detracts from it. In any case, it’s one of the strangest oils I’ve ever smelled. It’s woody, of course, but it’s also leathery, boozy, fruity, sweet, and absolutely unique.

I’d only ever smelled the leaves of these trees before, but when I went out and broke off a branch to use as a backdrop in the photo of the oils, the broken wood smelled just like a light version of the oil, so there’s no doubt that's what it is. I live with giant arborvitae trees every day, so it's obvious that I’m going to have to make a perfume in their honor. I suppose every perfumer and his brother will be scrambling to get this note in a perfume now, so it will be interesting to see what comes of it.
Posted by Doc Elly at 4:31 PM