I’m back from Southern California, both physically and mentally, ready to start posting again. 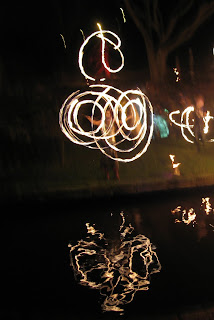 Anyone who has followed my blog for a while will know that I go through phases of prolific posting interspersed with periods of nothing. It’s just the nature of my life, in which I juggle many different parallel streams of activity and can only hold onto a few at a time, while the others move on their own from the momentum that I create. I’ll admit that this modus operandi partly stems from my own nature, which tends to make me want to do one thing obsessively for a while, then take a break. If I care enough about whatever it was, I’ll come back to it, like the burning torch that eventually sails back to the juggler’s hand after following its own independent trajectory for a while. If it gets dropped, I probably didn’t want to be juggling it anyway. 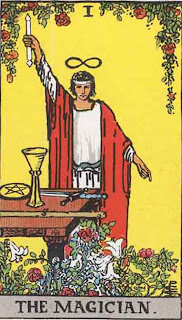 This whole discussion of juggling made me think about the symbolism of juggling. Medieval jesters and minstrels are sometimes depicted as jugglers (jongleurs), and that reminded me that at some point I’d heard of a tarot card called “The Juggler”. I looked it up and found that it’s what is now known as “The Magician”, the first card of the series, symbolizing new beginnings, new ideas, new journeys, and hidden things revealed. The Magician also appears to be an alchemist, scientist, shaman, con man, and trickster, so incorporates both positive and negative qualities. He’s God, the manager of positive energy and the Devil, the manager of negative energy (a la Quantum Demonology).

What I like best about the juggler, though, is the fact that he necessarily symbolizes both the beginning and end of the circle, the point where things come back to where they started, but continue on in a way that is both the same and different. The never-ending moebius strip of an infinity sign over the classic Tarot magician’s head.

As T. S. Eliot said in Little Gidding,
“What we call the beginning is often the end
And to make and end is to make a beginning.
The end is where we start from. …

… We shall not cease from exploration
And the end of all our exploring
Will be to arrive where we started
And know the place for the first time.”

I think this way of thinking really epitomizes my need for working in cycles. Each time I come back to perfumes long finished, perfumes in progress, or to my blog, I start over again, knowing each of those things for the first time.