THE NATURE OF CREATIVITY: ANALYZING THE DEV VARIATIONS 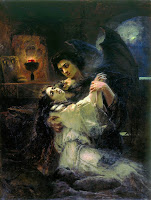 Sometimes I do things totally by mistake that appear highly thought out when I later come back to what I’ve created and look at it from a different point of view, as if I’m a different person seeing it for the first time with new eyes. Although the thing seemed to develop spontaneously and randomly at the time, I can later see an over-reaching method in the madness. I wonder how many artists of all sorts do this, embedding symbolic meaning in their work without consciously planning to do so? How many of the analyses that are done in school, pushing students to find the “correct” interpretation of symbolism in a writer’s, composer’s or artist’s work, are far removed from the actual facts of how the work was created or the artist’s original inspiration or intention? How many artists, put on the spot by people asking for an explanation of their work, “back into” a perfectly valid interpretation after its creation?

In the case of the different versions of Dev, made for the Devilscent project, I created each one when I was reading a different part of Tarleisio/Sheila’s Eggenberger’s book Quantum Demonology. My formulation of the scents must have been strongly influenced by the story line without my realizing it, because it just occurred to me a couple of days ago that the four versions of Dev form a progression that fits with the trajectory of the novel. I have debated whether I should make these thoughts public, before everyone’s reviews are published, but it seemed like a sort of revelation when it occurred to me that the four versions are not four free-standing and interchangeable alternatives, but four olfactory symbols corresponding to the natural progression of the story. I asked Sheila first, and she gave me the go-ahead, so I believe this will come out in near-perfect synchronicity with her own review of the four Devs in their mandala structure.

Dev 1 could be called “Foreplay”, since to me it seems relatively light, playful, aromatic, seductive, and optimistic, an enticing preview of possibilities that mostly overshadow the dark notes of labdanum (the common thread throughout) and African bluegrass that lurk beneath. 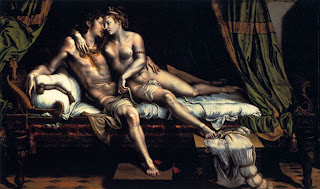 Dev 2 could be called “The Main Act”, since it’s rich, smoky, and spicy, fitting with the tempestuous, up-and-down romance that forms the central part of the story before it’s entirely clear that there’s no chance that anyone is going to live happily ever after. This was the part of the book where some additional perfume notes were mentioned, birch tar and immortelle, so these were added to the mix, consciously or unconsciously enriching it with rough smoke and honeyed sweetness. 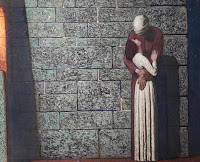 Dev 3 could be called “Leavetaking” or “Resignation”. Its muted, brooding, mostly dark notes correspond to the final loss of innocence, after the story has turned really complex and dark and all has been revealed, when Dev and the protagonist both have to face the reality of their situation, move on, and maybe settle for less than they had initially wished for. It’s not strong or passionate, but rather more the melancholy feeling that is present after the mission is accomplished, while waiting for the inevitable to happen. 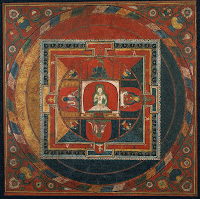 Dev 4 could be called “Reprise”, since it brings back the main theme pretty much stripped down to its bare bones, without ornamentation. It’s the feeling of having made it through major upheavals that left the characters smoothed down like tumbled stones, stripped to their essence, and in some sense triumphant in their resignation to fate and lack of illusions. The giant arborvitae in the top notes almost brings it back full circle to Dev 1, without any clutter, but with the implication that the cycle could begin again, on a different level.

Stay tuned for a special treat – an interview with Sheila on her creative process in writing the book.
Posted by Doc Elly at 5:57 PM