THE RASPBERRY ORCHID – A NEW FAVORITE 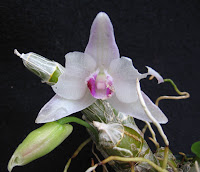 I’m not sure how much I’m going to be able to post this week, since there’s a big orchid show coming up this weekend, and I have to prepare several hundred plants to take there in the hope of selling them. On top of that, it’s high season for repotting, mostly getting young plants out of their community pots and into individual pots or onto individual cork bark mounts. I spent all of the daylight hours this weekend sawing cork bark into sections, drilling holes in it for hanging wires, tagging untagged plants, potting seedlings, mounting seedlings, and killing the slugs that were hiding under pots that had sat on benches undisturbed all winter. My hands are microabraded from handling sphagnum moss and fir bark chips for 12 hours straight each day. I’d rather be making perfume, but the orchids are still under my care, so I have to deal with them. This year I need to be more proactive about selling the nursery business.

Along with the mind-numbing manual labor and unrelenting demands imposed by taking care of living things, there are the moments of pure joy. Yesterday I found a cute little Dendrobium rhodopterygium in bloom, and picked it up thinking it would be a nice addition to my exhibit in the show. Of course the first thing I always do is sniff the flower, and when I did, I nearly fell over because it smells exactly like raspberries! It’s not a faint, wimpy raspberry scent, and it’s not “reminiscent of raspberries”. It IS fresh raspberries with all the nuances of fruit that’s just been picked on a warm day. When my husband smelled the flower, he agreed that it was raspberry, but “better than raspberry”. He’s right, of course. It is better because it has that moist, sensual orchid-y undercurrent and it’s not quite as sweet and sour as the fruit.

According to what I’ve read, Dendrobium rhodopterygium is the Indian variety of Dendrobium parishii, but instead of being all purple or pink, the flowers are nearly white with raspberry colored markings on the lip. The canes are short, fat and stubby. They lose their leaves in the winter, so the flowers appear on bare canes.

The slugs ate part of the flower, so in the photo it looks less attractive than it would otherwise. Unfortunately they got to the unopened bud, too, taking a bite out of the very tip. The plant is in the house now, where it should be safe. Now I have to decide whether to pollinate it or take it to the show, slug bites and all.
Posted by Doc Elly at 10:20 AM