I’ve been away from the blog for a while, catching up after the orchid show, dealing with my “real job”, and filling an unprecedented number of perfume orders that came in after Marla’s post on Ballets Rouges. Thank you, Marla! As a consequence, I’ve had to re-size my formulas once again to accommodate the greater demand. Today I’m supposed to get a new set of shelves in my workroom, which will help a lot with storage. 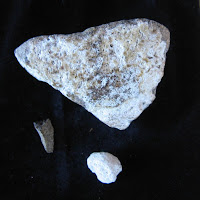 In the meantime, I’ve been playing around with real ambergris. A year or so ago I got a small amount of ambergris tincture and finally used some of it in a couple of the Dev variations. I really liked the effect it had on the fragrances, so decided to add it to my list of standard materials. I ordered a chunk of ambergris from New Zealand (photo), which is in the process of tincturing now.

Ambergris is not to be confused with fossilized amber, which is basically petrified pine resin. It has nothing to do with the perfume note “amber”, which is a combination of materials including the plant resin labdanum or its derivatives, nor is it related to any of the fragrance oils labeled “ambergris”, which might contain almost anything but ambergris. You have probably heard or read that real ambergris is whale vomit that has washed around in the ocean for years, mellowing out and taking on its own special aroma. More specifically, it’s a waxy secretion produced in the gut of sperm whales as a protective response to sharp objects they have eaten, especially squid parts. Once a lump has accumulated, the whale excretes it with its feces or, if it is too large, it is regurgitated through the mouth. The stuff floats around in the ocean for many years, being cleansed and weathered by the salt water and sun, taking on a distinctive fragrance. Eventually it washes up on a beach somewhere, where it’s collected by beachcombers who sell it to ambergris dealers. 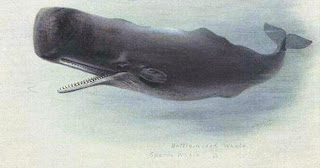 The piece of ambergris that I got was the “silver” variety, one that has undergone a fair amount of weathering so that the animalic aspects are relatively subtle, although still present. The vendor included small chips of the dark and white varieties as samples. I was surprised to find that when I opened the package, I could smell the ambergris through the wrapping, and the predominant note was similar to ambroxan. Maybe I shouldn’t have been surprised, but for some reason I was.

I decided to make a 5% tincture, so had to macerate the ambergris lump. In doing so, I found that it was fairly sticky, not as crumbly as I had expected. When I first put the ambergris in the alcohol, the solution turned black and the odor was a distinctive ocean-and-earthy smell, not at all like ambroxan. The only way I know to describe it is as a dark, fibrous shape, with a texture sort of like tree fern. It was an interesting fragrance in and of itself. As the weeks have passed, the ambergris bits have settled to the bottom of the bottle and appear to be slowly dissolving. The alcohol is now a dark pinkish gray color, and I’m starting to smell the ambroxan note along with the “tree fern”.

It will be at least 6 months before the tincture is ready, but I’m looking forward to incorporating it into some of my perfumes, especially a line of all-natural ones.