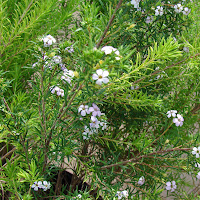 I recently got on a kick of trying South African botanicals, and have just discovered one that I’m definitely going to use in a perfume. Its common names are cape may and white confetti bush, and its scientific name is listed as Coleonema album everywhere I looked. I have no explanation for the grammatical mismatch of a feminine Latin noun with a neuter adjective, but maybe someone who’s up on botanical grammar can enlighten me. 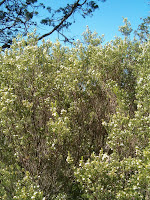 Grammar aside, Cape May is a large shrub with needle-like leaves that is native to coastal regions of South Africa. Pictures of the bush look a lot like a large rosemary plant. When they bloom, they are covered with a proliferation of white flowers that look very much like strawberry blossoms. Apparently it’s a favorite shrub for bonsai and topiary, lending itself to pot culture as well as trimming and shaping. Writing this has made me want one.

But the oil! As soon as I put it on a strip to test, the whole room filled with the most wonderful sweet, fruity sillage. It’s like nothing else I’ve ever smelled. Close up it has a bit of a camphorous, herbal, foody note, but even when my nose is right up next to it, it’s accompanied by the fruity smell, almost like taffy, but better. If I had to characterize the fruit notes, I’d say they’re like a fair amount of fresh blueberry, a little fresh guava, and something else fruity but unique. Of course I immediately got all excited about basing an all-natural perfume on cape may, but my enthusiasm was dampened a little when I discovered that the fruity sillage is a top note that doesn’t last all that long, drying down to an herbal, camphorous base that is also fairly short-lived. In the end, I don’t think I can build a fragrance around cape may, but, it will still be an interesting top-note addition to one of my all-natural fragrances

As usual, I’m offering a sample of this oil to one reader who leaves a comment saying what your favorite fruity perfume notes are. The random drawing will be on Sunday, June 3.