THE SMELL OF POLLEN 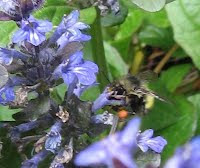 On Saturday I potted out 150 young cattleyas and 25 young paphiopedilum orchids. No brag, just fact. It was a beautiful, sunny day, and I did the potting on the back steps of my supply shed where there’s a huge patch of bright purple Ajuga repetans in full bloom. These flowers are like a magnet for bumblebees, who were swarming all over them, reveling in the warmth of the sun, chugging down the nectar, and wallowing in the flowers, dusting themselves all over with pollen. I had to stop work for a while and watch the little bees enjoying themselves in what must have seemed like the best theme park ever. I noticed that many of the bees’ pollen baskets were filled to the brim, and that a lot of them were bright orange. Pollen comes in all different colors. 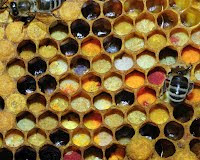 Seeing the bees carrying pollen like bags of groceries made me think about how pollen smells, and how to represent pollen in perfumery. There’s a certain scent that some “non-fragrant” flowers have that’s not anywhere in the space that I’d call floral, and that I think of as “pollen”. Non-fragrant camellias smell that way and some daffodils have a lot of that scent mixed with the floral “daffodil” fragrance. Some tulips have it. The best description I can come up with (other than “pollen”) is a minerally smell, a bit like the chemicals that I used to smell when I lived in North Carolina and ran on a golf course. I heard that the stuff was called Isotox, but it may have been combined with some sort of fertilizer and/or dandelion killer. 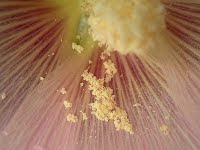 Just for curiosity, I Googled the “smell of pollen” to see what other people thought about it. The opinions included “garbage”, “stinky”, “cigar smoke”, “lovely”, “oranges”, “something burning”, “honey”, and so on. You get the idea. These very subjective opinions are all over the place. They’re probably all partly right and partly wrong, and are certainly nowhere near the whole story. I think they’re mostly based on the smell of tree pollen, not flower pollen, and the exact smell depends on the tree or the flower. Trying to find something in common among all of these varieties of pollen, I suppose it would be the minerally chemical smell and a touch of honeycomb.

Speaking of pollen, one of my memorable experiences from living in North Carolina was a thunderstorm that blew in while I was walking across campus. All of a sudden the wind started blowing hard, black clouds rolled in, and the whole sky took on an eerie yellow-greenish hue. There was a distinctive “Isotox” smell in the air. I thought, “OMG, it must be a tornado coming!”, but it wasn’t. It turned out that the local pine trees were putting out so much pollen that it had formed the equivalent of a dust storm, filling the air and forming a pollen cloud that rolled across the landscape. Bizarre.

Anyway, I suppose the bottom line is that if I wanted to make a pollen note for perfumery it would be a mixture of the minerally smell of fertilizer/pesticide and the sweet smell of beeswax. I hope no one would be allergic to it!

[Photo of bumblebee on Ajuga is mine; photos of pollen cells in honeycomb and pollen closeup are adapted from Wikimedia]