HIMBA DRY PERFUME TINCTURE AND THE ORIGINS OF PERFUME

As I’ve mentioned before, I have been trying a lot of South African perfume materials, and have been generally impressed with them. Among others, I was extremely fortunate to get a sample of a tincture that Sophia Du Toit had made from a dry perfume/incense traditionally made by the Himba people of southern Africa, a group that still lives more or less in the traditional way.

The tincture is a dark brown in color. When I first applied it, I thought the smell was going to be very subtle, but it quickly developed into a complex fragrance that included strong camphorous notes, probably from plants like buchu, along with a slightly musty, earthy scent, and a very subtle hint of floral notes. It’s a pleasant, comforting fragrance, on a par with any niche perfume and better than many. It’s the sort of fragrance that I’d like to wear to sleep because I think it would promote amazing dreams. 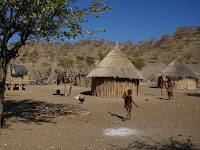 The most surprising thing about this tincture was that it lasted for as long as any strong commercial perfume. I applied it one morning, and it was still present on my skin more than 24 hours later, on the following day. Whatever the base notes are, they prolong the camphorous, almost eucalyptus-like scent for longer than I would have imagined possible, given that this sort of fragrance is usually a top note. Although fairly subtle, this perfume has amazing lasting power. Maybe it’s due to the Omumbiri resin that’s reportedly used in it. I have some of the dried resin, and now I can’t wait to tincture it and smell it. 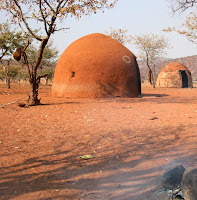 In the course of reading Sophia’s blog post about the Himba dry perfume and other matters, I was struck by her suggestion that southern Africa is the place where perfume originated. The region certainly offers a rich selection of materials that would facilitate the making of incense, body rubs, and scented sachets. If humans originated in that part of the world, it only makes sense that perfume originated with them. There is something fundamental and deeply rooted in our nature that makes us want to rub ourselves with leaves, roots, flowers, and resins, luxuriate in the fragrant smoke of various woods and plant materials, scent our homes with fragrant plants and flowers, and engage in the spiritual practice of meditating on scent and offering it up to whatever invisible higher powers we might imagine hovering over, under, around, or within us.

[Photos of Himba village in Namibia adapted from Wikimedia]
Posted by Doc Elly at 12:14 PM