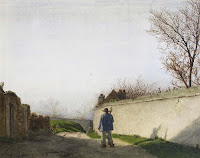 After a long winter of inactivity, I’ve started getting outside and running regularly again – at least a little bit. I’m not going to reveal anything about my actual activities or goals, since I don’t want to jinx it. Actually, I’m not sure myself, just taking it one day at a time. I suppose my motivation is simply that it feels good. The only other thing I will say is that every fourth day I take a “day off”, when I just go for a walk around the neighborhood to keep me in the habit of getting outside and moving.

Today was the walkabout day. I try not to go exactly the same way twice, so had the pleasure of exploring some roads that I usually don’t travel on. According to the local newspaper, the weather this June has set some sort of record for rain, with more rain in the first week than we normally have during the whole month. As a consequence, everything is incredibly lush and green, almost jungle-like. The aromas in the air were amazing, changing each time I passed a different set of trees, shrubs, or flowers.

The favorite part of my walkabout was going down a small residential road that winds through a ravine. There’s no traffic except for the cars of the people who live there, so it was relaxing to not have to worry about getting run down by an idiot in an SUV or a teenager in a pickup truck. For some reason it reminded me of walks that we used to take with my parents when we lived in Virginia, down country roads flanked by tall weeds flourishing in the sun, then up a shady, green, mountain path that went past an abandoned, “haunted” house overgrown with brush and vines, where daffodils still bloomed in the spring.

Some random highlights of the neighborhood survey: 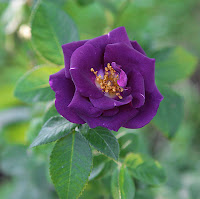 A micro-neighborhood with a cluster of big, old heirloom-type rose bushes, all obviously descended from the same ancestor. The flowers were fairly small, with a moderate number of petals, and a vivid red-purple in color. I think they must be the ancestor of the Rhapsody in Blue rose shown in the photo. The fragrance was unique, strongly peppery and spicy up front, with the rose floral scent taking a supporting role. I love stumbling on flowers like this!

A police car from the “city” of Burien parked by the side of the road. Burien is nowhere near where I live, many tens of miles of crow’s flight away, on the other side of Seattle. If the driver commutes to Burien to work, it’s a long trek. 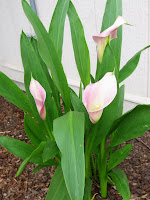 Calla lilies already blooming. Ours are still just in the leaf stage.

A tree with dark purple leaves and clusters of beautifully fragrant pink flowers. I have no idea what it was, but the flowers were honey-sweet, with a little bit of a black currant fragrance. 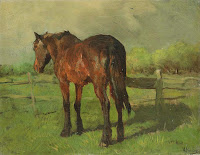 The discovery that one of our neighbors still keeps horses in their “front yard”. I thought the last of the farm animals had been displaced by suburban development, so the horse pasture was an unexpected find.

Now back to grading students’ papers, packing orchids, setting up my new “smart” phone, and (I hope) working on some perfume-related things.

[Painting of walker by Leon Bovin (1863); Purple rose photo adapted from Wikimedia (kicking myself for not taking my camera on my walks); calla lilies are mine; painting of horse by Anton Mauve, mid-19th century]