WHAT WERE THEY THINKING? CHANGES AT THE SEATTLE CENTER 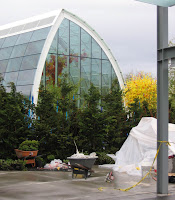 I haven’t posted much this spring due to what seems like an unusually heavy work overload. Finally, now that another academic year has come to an end, I’m trying to catch up on some abandoned posts that were started but never finished. This one was started during tech week of our last theatre show, back in May. That show took place in our usual performance space in the Center House at the Seattle Center, under the shadow of the iconic space needle. I hadn’t been there since last November, so was shocked to see that in the intervening months the last vestiges of the colorful kiddie rides at the Fun Forest amusement park had been removed. In its place was a closed-in, corporate-looking, over-designed space surrounding the new Chihuly glass museum. The museum itself looks like a standard-issue greenhouse, with formal, vaguely Asian-style gardens. The big building that used to house bumper cars and other forms of entertainment has been transformed into something that looks like an office park in an industrial strip mall where you would find shipping offices and wholesalers. The path I used to take to get from the street to the Center House is now blocked by a walled compound that reportedly charges $19 admission to see Dale Chihuly’s personal collections of non-glass tchotchkes. In the courtyard are a few large glass installations, just waiting for some teenagers to throw rocks over the fence at them. 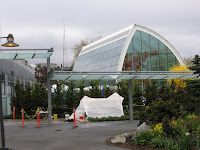 Oh well, I suppose the whole concept fits right in with the tradition of building a fancy building to house the collections of “stuff” amassed by the very rich. After all, the Experience Music Project (EMP for short) is just a big space to house Paul Allen’s collection of music memorabilia. The EMP is a Ghery-ish, brightly colored, metallic-tiled, twisted structure that one of my school colleagues described as “looking like the Space Needle vomited”. At least it doesn’t look like it’s wearing a corporate suit, and the metallic finish shines beautifully when there’s a late afternoon sun break. Like it or not, the building is more unique and interesting than the "stuff" that's inside. 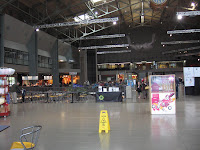 Apparently as part of the Chihuly renovations, the food court on the ground floor of the Center House was also remodeled, removing all of the colorful food stands that used to brighten it up a bit. Now it’s a bare, gray dismal-looking, corporate-feeling space that could easily be a warehouse without the boxes and forklifts. Most of the food vendors are gone, replaced by a trendy window area that would be right at home in an office building, and a lot of boarded-up booths with “for rent” signs. The only vendors left are what appears to be an upscale burger chain, a Starbucks, a Subway, and a kebab stand that seems to be family-owned and operated, the last vestige of the old guard. The prices at the kebab stand have almost doubled. According to the woman who works there, the rent went up significantly after the remodel. I hope they can make it. At least they don’t have much competition, and not much prospect of any in the near future unless the economy suddenly jumps up from its deathbed and walks.

Now I hear that Seattle wants to sell its iconic old waterfront trolley cars to Saint Louis. The trolley was banished a couple of years ago to build a rather soul-less sculpture park. The argument for removing it was that it would clash with the suburban-mall appearance of the “do-not touch” sculptures and their grassy suburban-lawn surroundings. The more things change, the more stereotyped and sterile they seem to become. The most ironic thing of all is that “art” installations have been in some way responsible for this de-humanization of the city.
Posted by Doc Elly at 12:54 PM