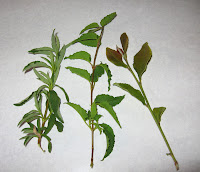 School has started again, so mornings are all spent inside. However, one of the activities that I usually do with my freshman class is a campus walkabout to look at public art, architecture, design, and other fun things. Yesterday afternoon I took a walkabout myself to make sure that I have a good route planned out, little thinking that it would yield a treasure trove of perfume-related plants. 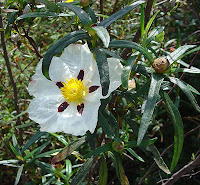 The first and biggest surprise came when I was walking down a path and suddenly smelled a familiar, woody, resinous scent. I looked all around, but wasn’t able to localize it. I shrugged it off thinking it was just my imagination, or else there was a bit of labdanum clinging to my clothing somewhere and being activated by the sun. I went on, but a little further down the path I smelled it again. This time there was only one kind of bush in the vicinity and, when I touched it, it was sticky! Really sticky, especially the new stems. After touching the bush, my hands smelled exactly like the labdanum absolute that I use. I’d found Cistus ladanifer growing right on campus in huge profusion. The bushes are bigger than I’d imagined them being, as tall or taller than I am, with thick woody trunks. If you don’t work with labdanum, it’s probably hard to imagine the thrill of finding these legendary plants growing in your very own neighborhood with the resin oozing out, right there for you to touch and sniff.

There were two varieties of Cistus, one the “real thing” and another with wider leaves, less resin, and a woodier scent. I took a small cutting of each that I’ll try to root, but will also look for a larger ladanifer plant at one of the local nurseries. 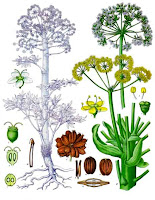 The next surprises came when I checked out the medicinal herb garden. The most surprising thing I found was a huge asafoetida plant, Ferula asafoetida, which is the source of the Indian spice, hing. Live, it resembles a huge Angelica plant with the typical dill-anise-angelica type seed heads. I was surprised to find that the leaves had a strong, fresh, herbal scent rather than the typical garlic-onion odor of the spice, which is made from the resin exuded from the roots.  Now I want to grow an asafoetida plant and tincture the leaves. I took a seed head, and will be raising little asafoetida plants in the greenhouse this winter for garden planting in the spring. 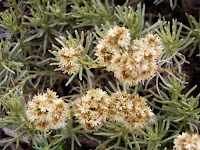 Another plant that I was pleased to find was immortelle, Helichrysum italicum, commonly known as curry plant. The leaves really do smell like curry, but also have a hint of the sweet, maple-syrup scent of immortelle absolute. I took some immoretelle seeds, too, which look like clusters of little dandelion seed puffs. 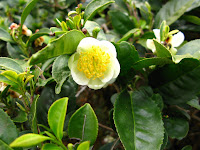 The final surprise was finding a big hedge of tea bushes, Camellia sinensis. I had no idea that we could grow tea in the Pacific Northwest, but evidently so. The plants look like regular camellia bushes with medium small leaves. Interesting. This one is going into my garden, too, along with the others, initially as a cutting that I’ll try to root and, with luck, a bigger plant from a nursery. Imagine harvesting and making your own tea!

[As usual, I didn't have my camera or phone with me, so the photos of the Cistus Helichrysum and Camellia sinensis flowers are from Wikimedia, as is the botanical illustration of the asafoetida plant. The cuttings laid out on the kitchen counter are my photo]
Posted by Doc Elly at 10:31 AM