A WEEK OF SUMMER 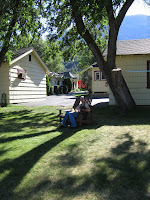 It’s interesting that by going far to the north we were able to finally enjoy a little summer weather. I suppose it’s the difference between inland and the coast, but it still seems counterintuitive. Central BC this time of year is warm and sunny, except for the occasional shower that keeps everything ridiculously green north of . There’s something deeply satisfying about being able to wear minimal clothing and feel warm air even at night, or sitting in the shade at a little motel in Lytton, where we stayed on the way home. It made me realize that warm summer nights are what I miss most living in the Pacific Northwest. I know there are many who would disagree with me, but I’m just a tropical creature at heart.

We set out Monday evening and drove up Highway 5 through Kamloops. Around midnight we were so tired that we just pulled over on what appeared to be a side road with an overlook area, and slept in the car. We woke up to a surreal scene of bright, bright sunlight, blue, blue sky, a housing development-to-be in the middle of the desert along with a newly built, completely deserted, golf course. I don’t think there was another human for miles around. 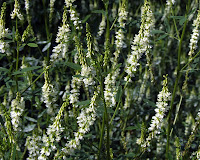 Going north, there seemed to be fewer dead lodgepole pines than on the last trip. Maybe I was expecting to see dead, purple-tinged ghost forests everywhere, or maybe the loggers have been clearing out the dead trees, which are used to make “blue pine” furniture and other things. There was a riot of wildflowers along the roadsides everywhere, with tall white sweet clover (Melilotus albus) everywhere. It has a beautiful, sweet, tonka-like scent that would periodically waft in through the car windows, reminding me that one of the projects on my agenda is making a really good clover accord.

Other smells along the way, north and southbound:  A pulp mill that I smelled miles before we passed it – not a good smell, but the only really bad form of pollution that we encountered; a sawmill surrounded by the wonderful smell of fresh pine logs; the smell of newly cut hay drying in the sun; the damp, cool, earthy smell that rises up from the ground in the early evening after a day of hot sun; the smell of mixed wildflowers along the roadside, usually dominated by sweet clover. 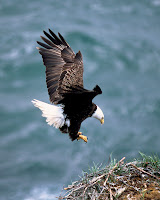 The trip was also memorable for the wildlife that we saw along the way: A bald eagle that flew directly over the car carrying a huge stick; hawks and ravens everywhere; a large deer standing on the side of the road; and to top it all off, a black bear that was slowly crossing the road, probably coming up from the river.

We slowed down to let it cross the road, it just looked at us, pushed up the barbed wire fence on the other side of the road with its front paw, ducked under, and went off through the field, up the hill, toward the woods. That was the first time I’ve ever seen a bear outside a zoo.

We rolled into Seattle yesterday evening, to find that it was actually warm here, too. I think it was the only warm day of the year. This morning we’re back to cloudy skies and cool temperatures. Oh well, we had a week of summer.

[Sweet clover, eagle, and bear photos from Wikimedia. It seems I'm always too busy looking at things to remember to have my camera (or even my phone) out at the critical times.]
Posted by Doc Elly at 1:37 PM