IN THE END, IT’S ALL MUSK 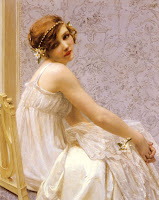 Nearly every day I try a sample of someone else’s perfume, sometimes multiple perfumes in one day. Although I don’t write about them publicly, I do try them at times when they won’t interfere with my own work.

No matter how they start out, it seems like in the end what’s left more often than not is musk. Usually it’s a mixed bouquet of synthetic “white” musks, and much less often some synthetic quasi-musk like ambroxan. Actually, if there are musks in a perfume I can usually smell them as top notes, just as I can smell sandalwood or synthetic ambery-woody bases as a top note, so I know how it will end right from the beginning. Occasionally the musks remain hidden until somewhere well into the drydown. But in the end, there’s musk. If nothing else, it’s tenacious.

Don’t get me wrong, I like musk as much as the next person, maybe more. I just wish that more perfumes dried down to something a little different, or at least that the standard white musk mixture was combined with other tenacious elements for interest.

I use musks, including all sorts of synthetic “clean” musks, synthetic reconstructions of not-so-clean animal musks, and even “botanical musk”, aka ambrette. I usually don’t use a lot, and quite a few of my perfumes contain no musks at all. Whipping up a nice white musk base is the simplest thing in the world and it’s a sure-fire way to have a long-lasting fragrance that smells good and smells conventional. It’s sort of like using frozen pie crusts to make pies. Pour in your canned fruity-floral filling and  … voila! … a professional-smelling product. Making a base without the standard musk medley is more of a challenge, but it’s worth it when the perfume dries down to something a little different, even though it may be on the weird side and not quite as tenacious.

I wouldn’t go so far as to say that using a white musk base is a cop-out, because there are many wonderful perfumes that need a white musk base in order to work. It’s just that it seems overused in both mainstream and niche fragrances.

[Painting of woman in white by Guillaume Seignac, early 1920s; pie photo from Wikimedia]
Posted by Doc Elly at 9:38 AM