BACK FROM THE BEACH AND FACING ANOTHER WEEK 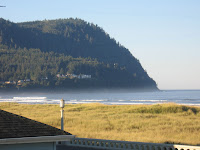 The orchid show in Seaside was successful for many reasons, not least of which was that it provided an opportunity to get away from everything overly familiar and spend two gorgeous, warm, sunny days at the beach. Seaside is a small tourist town on the Oregon coast, about a 3 to 4 hour drive south of Seattle. The beach is wide, with very fine sand, and a good many broken sand dollars and razor clam shells lying around, but not so many that they can’t be avoided when running or walking along the water’s edge. Between our hotel and the beach was a grassy dune area and a paved pedestrian promenade. The view from our window was the dunes, the beach, and the hill to the south of the beach. At all times of day there was a lot of “fog” kicked up by the surf, but it was especially noticeable in the early morning and evening. 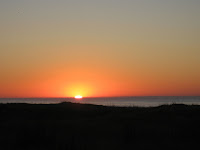 I had to spend most of both days at the show, but did manage to get out on the beach for a few hours each day between closing time and sunset. I’m not a water person. I don’t particularly like to swim, and am not good at it. I don’t like to be in water over my head, and I don’t like to put my face in the water. I hate cold water in all forms, but I do love the beach. I was thinking about this over the weekend, and how strange it is that I’m attracted to the beach when I don’t like to be immersed in bodies of water larger than a hot tub. I decided that the beach itself is neither water nor earth, but air and sun. I’m not superstitious, but I do have enough information about my horoscope to know that it’s almost all air signs, mostly Libra, with a rising sun and some Leo fire thrown in for good measure. This accident of birth could be used to rationalize why I love the beach, and why I grow only “air plants” that don’t require soil, although I suppose it could be used to rationalize just about anything, including why I love the “saltwater taffy” that’s always sold in beach candy shops. To me, the beach represents freedom from whatever earthy constraints there are on land and, at the same time, freedom from whatever dangers are lurking in the deep water. It’s a magical place at the interface between two worlds that I really don’t want to be in. 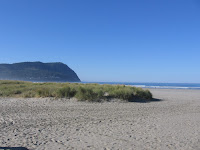 Fall quarter is in full swing, so it was back to the reality of the classroom as soon as I got home, with theatre rehearsals in the evenings. I need some quality time with my orchids and with the list of orders waiting to be filled, but it probably won’t happen until the weekend. In the meantime, I’ll just try to get through my list as best I can.
Posted by Doc Elly at 9:20 AM

Labels: beach, making the most of a business trip, Oregon, Seaside, why the beach is so appealing