Some time ago I was reading an article reprinted from the New York Times about how people are influenced by photos of other people’s houses (real or imaginary) posted on the internet, and feel the need to surround themselves with props that create the illusion of whatever specific lifestyle they aspire to, usually that of the “rich and famous”, whatever that is. According to the article, it involves, among other things, a certain Botero art book that lies eternally unopened on a certain style of coffee table. Having seen some of these interior design photos, I think it also involves a bowl containing flowers or fruit, and/or puzzling objects with no apparent function positioned on the coffee table next to the book or books.

As a generally stripped-down person who thinks the best place for props is in the theatre, where they actually serve a purpose, the article got me to wondering about how much of what people own really does simply serve the function of a prop, and nothing else. To what extent is their environment a theatrical setting for the drama they wish to enact? How successful is the set in bringing about an enactment of the desired script? How does perfume fit into the concept of a set with props? 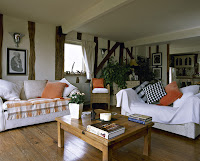 Of course, Shakespeare was right in observing that the world is, in some sense, a theatre – a shabby old theatre that’s been extensively modified and, more often than not, trashed by all of its previous users to the extent that it threatens to go out of business if we don’t do something to remedy its sorry state. We and our troupe have to share it with other groups that have competing interests. We have to clean out their trash, ask management to replace the burned-out lights and repair the ripped curtains, and try our best to build a little fantasy world that serves the purposes of our own show for the short time we’re here. In the larger sense, we have to work around all of the sets built by others and use whatever prefabricated pieces are lying around in the shop. For better or worse, everything from sets through props and costumes follows a rigid format dictated by the space we have to work in, the prevailing availability of materials, the current selection of design concepts, audience expectations and, not least, our own budget. 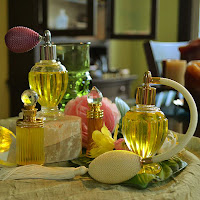 So how does perfume serve as a prop? A lot of people seem to be just as infatuated with the visual image of a perfume bottle as they are with what’s inside it – maybe even more so. Displaying perfume bottles in a bedroom, bathroom, or other place seems to be a common practice, regardless of whether the perfume is actually used. The displays seem to range from a whole horde of bottles, which presumably give the impression of wealth and abundance, to a single accent piece, elaborate, offbeat, or minimalistic, depending on the decorating scheme it’s a part of.

Now here’s a question. If you’re into perfume visuals and your favorite perfume comes in what you consider an ugly bottle or a bottle that doesn’t resonate with your set concept, what do you do about it? Do you not buy the perfume because it clashes with your décor or your self-image? Do you buy it and decant it into a bottle that you have chosen and love? Do you live with the unloved bottle and gradually become assimilated into its aesthetic world as it is assimilated into your existing one? Do you put it in a brown paper bag and keep it hidden under your sink, pulling it out only to use it?

Don’t get me wrong. I’m not discounting the importance of environment in promoting mood, mindset, and even behavior. It’s a huge factor in how we feel and act. I’m just saying we should think about what aspects of our environment really help optimize the actual lives we live and what aspects are contrived attempts to live in a way that is not natural and comfortable, or convince others that we live a certain way. I was going to talk about perfume itself in this context, but got carried away with the visual stage set idea augmented by perfume bottles. More later.