THE END OF THE RAINBOW 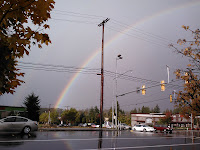 The rains have finally come, in all their forms, from fine mist through heavy downpour. In a way it’s depressing to know that the rain is here to stay until next summer, and that pretty soon it will be getting dark at 3:30 in the afternoon. However, this past week there’s been an up side to the rain, in the form of some of the most spectacular rainbows I’ve ever seen.

On Sunday afternoon, coming home from a rehearsal at the Seattle Center, I was driving north on highway I-5. It was raining hard everywhere, but the sun was shining brightly, creating the brightest rainbow I’ve ever seen. It was a full super-double rainbow, with the colors duplicated in reverse in the inner circle, and another complete rainbow above it. It glowed as if it were lit from inside.

The most amazing experience was driving through the end of the rainbow. I didn’t even know this was possible until it happened. Because it was raining everywhere and there was a huge cloud of spray kicked up by the vehicles on the freeway, the rainbow extended from where it was in the sky all the way down to the road surface.  Passing through the end of the rainbow was like being showered with multicolored jewels of light. Because the road curves around a good bit, I ended up passing through both ends of the rainbow multiple times. The proverbial pot of gold took the form of shimmering golden light, which was good enough for me.

When I got home Michael told me that lightning had struck in the field of blackberries across from our house. Thankfully I wasn’t home at the time. Having almost been struck by lightning twice, I really don’t want to experience it a third time. 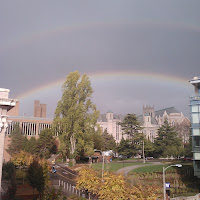 Yesterday I looked out the window of my office and saw another complete double rainbow, so they just keep coming.  I started to wonder if anyone has ever made a rainbow-themed perfume. I can’t remember ever hearing of one, but it seems like a good idea. I would envision it as being a light, bright scintillating, watery scent, maybe a little bit ozonic from the lightning that sometimes accompanies it.

Does anyone know of an existing “rainbow” fragrance?

[Both photos were taken by my phone. The top one was taken when I got off the freeway and found a good place to pull over. By then the rainbow wasn’t as bright, but you can see the general idea. The second one was taken from my office window, overlooking part of the campus.]
Posted by Doc Elly at 10:13 AM