FIFIS AND THE MEANING OF AWARDS

Ever since one of the By Kilian fragrances won the Fragrance Foundation’s “Indie” FiFi Award, there’s been considerable discussion of whether that choice was appropriate or not. There has been a lengthy discussion on Basenotes, in which everyone championed his or her own favorite indie fragrance, and blogs like The Alembicated Genie have jumped into the fray as well.

Ignoring, for the time being, the completely subjective and unanswerable questions of which fragrance should have won the top “indie” award and how to define “indie” in the first place, the most important piece of information coming out of all this is the fact that the “nominating” process is not a nomination at all, but a relatively expensive (for a true starving indie artist) self-submission. I’m happy to see that this little-publicized process is being hauled out of the closet and exposed to the scrutiny of perfume consumers everywhere. Now you know what “Nominated for a FiFi Award” really means. It means the “nomination” was bought and paid for by the company that made the perfume. Nothing more, nothing less. 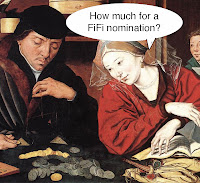 When I heard that there was a new, “indie” FiFi category, I was initially interested, but that interest quickly turned to consternation when I learned that the “nomination” process would have simply involved submitting one or more of my own fragrances and paying somewhere between $200-400 for the privilege of calling those fragrances “nominated for a FiFi award”. I was under no illusions that submission would result in anything more than the “nomination” and whatever mystical cachet that might have among those who don’t know how the process works.

Semantically, there is a clear difference between a “nomination”, which comes from a third party, and a “submission”, which one does oneself. To call a paid submission a “nomination” is misleading, to say the least. In my admittedly overly-scholarly world-view, nominating oneself for an “honor” and paying to do so is a worthless exercise in tacky self-promotion.

Maybe it’s time for all of us artisan perfumers to band together and establish our own renegade organization with its own lobbying efforts and its own awards. Let those involved in big industry give each other gratuitous pats on the back at a glitzy party, and let the same old players owned by a few huge corporations show up for that exercise every year. Let them pay their money so that they can brag about their self-nominations.

Blogger awards and best-of lists are one form of genuine, mostly unsolicited recognition that already exists for indie and artisan perfumers. I’m sure everyone finds it gratifying to be mentioned by a blog or other publication, especially when that mention was freely given. However, in my dream world, it might be interesting to develop some sort of an artisan anti-FiFi award. It could be done through a process in which the perfume-consuming public is free to recommend that their favorite artisan perfumes be nominated (a “FanFair” award?). Alternatively, it could be done as the Oscar nominations are done, through an “academy” of committees with real expertise in specific areas (an “Artisan Fragrance Academy Award”?).   Once nominated by an unaffiliated third party or parties, qualified artisan perfumers would then be notified and could choose to submit their work for an award, or not. That way, “nomination” would be a genuine honor of sorts, not a purchased commodity.

Surely there are people out there who would enjoy volunteering their noses and their expertise to serve on evaluation and selection committees for various fragrance categories in return for the joy of sampling good perfumes and getting to keep the samples. Obviously, evaluating films or perfumes is not as clear-cut as a running race, where someone unequivocally crosses the finish line first, but if we in the artisan perfume community do want to provide recognition of excellence, the process should be as fair and unbiased as possible.

On the more serious side, there must also be people out there who would be willing to do some pro bono organizing of efforts to counter regulations and legislation designed to limit artistic expression and intentionally or unintentionally drive small artisan entrepreneurs of all types out of business. If all of the little artisan groups could work with one another and unite under one umbrella, I have no doubt that positive things could result. Maybe that’s too much to ask, but a series of awards that really meant something might be the carrot on the stick that could get such a movement going.

[Football trophy photo from Wikimedia; money-changer painting adapted from one by Marinus van Reymerswale, 1541; trophy award ceremony photo from my own ancient archives]