THE DEVIL AND HIS PERFUMERS: PART 3

The numbers are probably confusing, but Neil's first Devil Scent was named, not numbered, so his #2 is actually the third in the series. Once again, the quality of these fragrances is impressive.

Neil Morris DevilScent #2
Sweet, resinous, and just a little bit bitter to start with, with faint notes of wintergreen, this version is lower-key than the previous two, but still extremely compelling. A few minutes in, I think I smell a lot of cumin along with some labdanum and sweet floral notes. For a while the cumin dominates, a raw smell of freshly crushed cumin seeds. However the strength of the cumin seems to fluctuate.  I smelled a lot more cumin the first time I tried it than I did on the following trials. Maybe I was just expecting it on subsequent wearings, so didn’t notice it as much. The strong spicy mixture sweetens as it develops, becoming almost like candy or amaretto, but still with a hint of cumin.  In this phase it’s incredibly rich and sensuous. As it continues to dry down, I start smelling some sort of animalic musk. At this point the fragrance changes completely, becoming quietly gorgeous, almost a “one’s own scent but better” feeling. It doesn’t last as long as the others, only 4-5 hours, before it’s pretty much merged imperceptibly into my skin. Amanda Feeley Devilscent #3
Devil Scent #3 is another bitter fragrance, but this time it’s more green, Artemesia-like herbs than wood or sawdust, almost like a purified version of #2 with a tiny hint of citrus and some resinous labdanum. As it develops, it becomes a little bit spicy and peppery, then luminous, almost translucent. It’s quietly beautiful, a scent to meditate on. Towards the end, it becomes sweet and slightly incense-y. Longevity is excellent. It’s a truly lovely fragrance that reminds me of walking through a field of sun-warmed dried grass and sagebrush, a fragrance that I want to sniff and sniff. It’s my favorite of Amanda’s Devil Scents. I want a bottle of it! 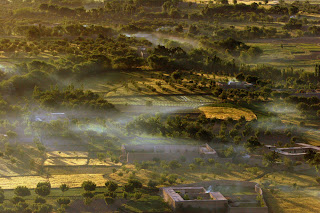 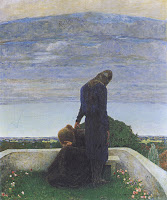 My own Olympic Orchids DEV #3 is my primary go-to scent when I want to relax. I wear it sometimes when I sleep, and always have amazing dreams. It’s 100% natural (as I think Amanda’s is, too). It starts out with a spicy-boozy-fruity note that reminds me of an old-fashioned plum pudding, but gradually becomes darker, more animalic, and almost sinister as the labdanum, ambergris, and African bluegrass come to the fore. If I put it on at night, it lasts until well into the next morning. For some reason it reminds me of my grandmother’s room when I was a kid. 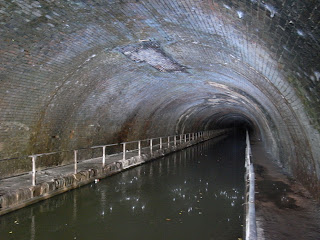 I think we all based our #3 fragrances on the part of the story when Dev and the heroine part company, convinced that it will be forever (literally, since they are both immortal at that point). It’s the adagio movement of the piece, in a minor key as they both walk away from each other. Neil turned it into a traumatic parting followed by a swirl of conflicted memories as the heroine revisits the past, viewing it through a new lens, gradually making her peace with it all. I think Amanda and I both interpreted the separation process as a sort of quiet resignation to the inevitable. Her fragrance evokes the heroine crying a few tears initially, but walking quietly away with fond thoughts of the past, looking forward to peace and an almost religious enlightenment in the future. Mine, like Neil’s, has her kicking and screaming a little as she says goodbye, but then walking away in quiet resignation, into a bleak future in which she sees an empty, dark stone tomb extending outward into infinity. As before, all of the perfumes complement each other, like different musical instruments playing their parts in a single piece.