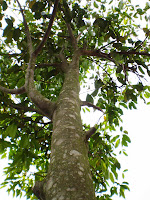 Today we have a guest post by GAIL, who is my accomplice in oud sampling. Here's what she writes:

We are still working on sampling what we believe are real oud oils, so Oud Fest II was devoted to sampling four medium-priced (for real oud!), fine quality oils from Assam. 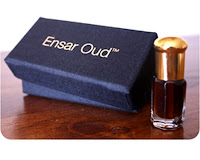 Ensar Oud: Assam Organic
The first sample, Ensar Oud's dark golden, honey-like "Assam Organic", was applied to the left wrists of the participants. It opened with a scent of bright, fermented wood and the smell of a clean milk-house (a combination of sweet hay, milk, caramel and manure). At five minutes the milk-house and fermented wood vanished leaving an impression of purple plastic and camphor that morphed into the scent of oat bran and brewing mash. About twenty minutes into the test "Assam Organic" suddenly took on the odor of an open third world drain or gutter with a relatively strong sillage.  This phase persisted for about twenty minutes, eventually thinning to a cloud of sulfurous smog.  After about an hour the odor of drainage and smog evolved into a sweet, grassy, semi-indolic perfume.  The dry down lasted through the night, changing to an understated floral accented with citrus peel and tea.

Sampling "Assam Organic" was like taking a day tour beginning at a dairy, continuing on to a brewery, then traveling through a large and dirty third world city, finally stopping for a cup of tea in a grove of flowers and citrus trees.

[Note: Assam Organic is from plantation-cultivated trees. Unlike wild-harvested ouds, it is a renewable resource, albeit slowly renewable. One can only hope that, as wild Aquilaria populations are decimated, more producers will turn to ethical planting and harvesting of agarwood trees.] 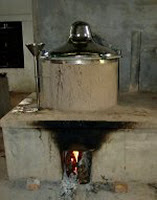 Agar Aura: Royal Assam
The next oud, Agar Aura's "Royal Assam", a dark golden oil with the consistency of honey, was applied to the right wrists. The initial impression of "Royal Assam" was that of a translucent green, slightly camphorous floral veil covering a sharp, bright woody scent.  At about two minutes the fragrance developed into a creamy spice and dusty plum that gradually changed to a combination of anise, champaca, sweet grass and tea. Twenty minutes into the test "Royal Assam" took a surprising turn toward dark chocolate, toffee, pink pepper, allspice and the scent of some sort of small berry (perhaps our Northwest native huckleberry?).  Despite the spice and fruit, the oil retained its airy, translucent character, even as it gradually dried down to a melange of vanilla, tea, champaca, the tiniest whiff of something like passion fruit, and dried maple leaves.

Agar Aura: Hindi Qademe
The third sample, Agar Aura's "Hindi Qademe", also the consistency and color of dark golden honey, was applied to the inside of the left arms below the elbows. It opened with a strong, pointed, bitter chocolate, a hint of camphor, fermented wood and barnyard.  After about a minute the camphor became more intense.  Around five minutes, notes of burnt sugar, warm tea and dusty dried leaves replaced the chocolate and barnyard.  This combination remained relatively linear with an occasional breakthrough of sweet hay.  As the fragrance dried down it became somewhat drier and cooler, but the sweet hay and tea remained, finishing with a hint of plastic and a suggestion of a woody, cedary scent reminiscent of  norlimbanol. 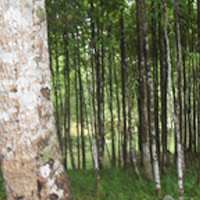 Oud Select: Indian Assam
The final oil tested was Oud Select's "Indian Assam", a thick and very dark oil applied to the inner right arms below the elbows. "Indian Assam" began as a pungent combination of green camphor, sun-dried tomatoes, fine olive oil, mushrooms and acidic tomato paste.  After about ten minutes the olive oil picked up a flavor of candied vanilla, tea and sweet wood.  An hour into the test, an aroma of thyme and other green culinary herbs made an appearance. The dry down of translucent sweet hay, tea and fine olive oil stayed close to the skin until the following morning.  While not a true gourmand scent, "Indian Assam" was definitely a foodie.

Gail: When we decided to test only Assams we thought we might find a scent that would be common to all four oils.  Many articles on oud consider barnyard and animalic odors (perhaps an outcome of the traditional curing and distillation processes used in Assam) to be characteristic of Assam oils. The results of Oud Fest II suggest instead that the scents of tea, sweet grass, hay and camphor were common to the four oils tested.  Of these notes tea seemed to be the most obvious and persistent. The Indian state of Assam is famous for the flavor of its tea. Why not oud that smells like tea?

Having completed over two hours of intense testing the participants adjourned Oud Fest II to their favorite pizzeria where they enjoyed items from the happy hour menu.

Ellen: Like Gail, I was looking for some common features that would link all of the Assam ouds, or all Aquilaria agallocha oils, together. However, there’s such a variety of oils from every region and every species, that it’s hard to make any sort of generalization. Traditionally, Assam oud is noted for its “barnyard” smell, but one of the four we tested had no “barnyard” odor whatsoever. I didn’t get the strong impression of tea that Gail did, although there was a hint of tea in some of the oils. If I had to put my finger on one or two characteristics, I think it would be a sweetish, slightly matte, caramel-like character that all of the Assam oils had when contrasted with the sharper, more sparkling Indonesian and Borneo ouds that we tested before.

One thing that particularly struck me when we went outside into the cold air, was a sharp, woody smell that stuck in my nose and was activated by the cold. It was almost like smelling a cedar or juniper wood fire on a cold winter night. I’m sure it wasn’t from an actual fire because I smelled it outside Gail’s house, again in the parking lot of the pizzeria both arriving and leaving, and in an attenuated form all night. I don’t know which oud was the main contributor to this beautiful fragrance, or whether all combined to produce it. In any case, I thoroughly enjoyed the experience.

[Top photo from Wikimedia. Other photos from the websites of the respective companies]
Posted by Doc Elly at 10:41 AM