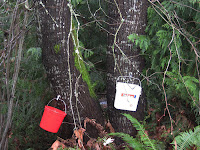 Last summer I read that it’s possible to make maple syrup from our local maple species, the big leaf maple, Acer macrophyllum. It’s aptly named, given that the leaves are the largest of any maple species, almost twice as large as my outstretched hand. These trees grow all over the Pacific Northwest, where they are the predominant deciduous species in the lowlands and foothills. They’re often covered with thick green moss. In rainforest areas, they're completely draped with moss, like green veils. 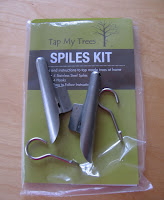 We have some big leaf maple trees growing on our property, and so does Gail. This spring we both decided to do an experiment and tap the trees to see if we could make syrup. Gail’s more organized than I am, so she’s been collecting sap from her trees since mid-January, which is the right season to do it around here. Due to the lack of the proper size drill bit, we’ve been procrastinating, but yesterday we were finally ready to tap the trees and install the spiles. A spile is a conical metal tube with a small hole on the end that goes in the tree trunk, with a spout to deliver the juice into the bucket, and a hook on which to hang the bucket. 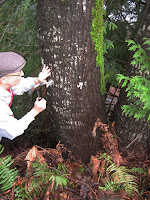 The instructions said to drill a hole 2-2.5 inches deep about 3 feet up the trunk, aiming for the xylem layer, that conducts sap upward from the roots. The spile is then tapped into the tree with a hammer, the bucket is hung, and you wait.

Gail has collected over 20 gallons of sap from her trees, and has started boiling it down, but apparently those trees are slowing down or stopping sap production now. The taps we put in yesterday haven’t produced a single drop so far. The taps are installed in big, husky trees that look like they should be perfectly capable of making gallons of sap. The wood shavings were white and healthy looking, and the spiles can only go in so far, so I don’t think we missed the xylem pipeline. I’m thinking that February is already too late in the season. After all, many of the trees here are in active bud, the crocuses and hyacinths are coming up, and the birds are singing their little heads off. Next year we’ll put the taps in on or around January 1 so that we have a month of collecting. February may be the season for New England maples, but not for ours. Live and learn.
Posted by Doc Elly at 11:14 AM