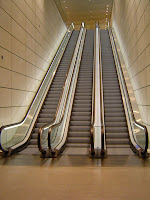 It’s been one of those months when time seems to flash by faster than the speed of light. I woke up one morning at the beginning of February, blinked my eyes, and now it’s getting well into March. It’s felt like running up on the down escalator. I’ve only dealt with immediate and pressing deadlines, so haven’t done any of those things that languish on the second tier – things that can be put off until tomorrow without causing a major disaster. Posting here is one of those things that always seems like it can be put off until tomorrow, but at some point the tomorrows pile up to a critical mass and I feel like I either have to post something or forget about the blog entirely. 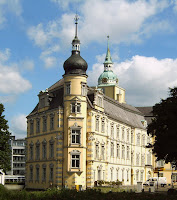 It seems like that time has come, even though March is undoubtedly going to be just as problematic time-wise as February was. On Tuesday morning I leave for an extended trip on university-job business, first to Germany for a consulting gig in Oldenburg, then to visit friends and colleagues in Bonn, then to the Toronto area to give two talks. When traveling, I never know what sort of access I’ll have to the internet, or even how much time I have for anything besides activities planned by others. However, if there are any readers in Oldenburg, Bonn, or Hamilton, Ontario, let me know. I’d love to get together and maybe even sniff some perfume with you! 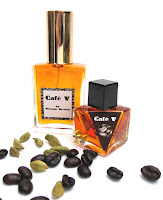 The big news on the perfume front is that I’ve finally released a fragrance that I’ve been working on for some time, Café V. There’s a first-rate review of it here. Some of you may remember testing earlier versions of it about a year ago. I took your suggestions to heart, and have tweaked it accordingly. Thanks to all who commented on it! The process of tweaking can go on indefinitely, so it really feels good to get closure on a fragrance.

I’m currently working on two chocolate-themed fragrances, a special edition for the San Francisco Fragrance Salon later this month and one for the Seattle Fragrance Salon in May. The chocolate theme is in honor of the fact that both salons are held in conjunction with chocolate shows. I’m proud and excited to have a major perfume event happening on my home turf, and plan to go all-out on the Seattle show given that I don’t have to travel to it. Seattle is really becoming a hotbed of innovative perfumery!

I don’t know whether I’ll have time to get samples ready for my testers before I leave. Let’s assume that I won’t, so they will be coming in late March or early April. If I only post sporadically during March, it’s because of the constraints imposed by travel.

[Photos of escalator and Schloss Oldenburg (which I'll probably not have time to see) are from Wikimedia]
Posted by Doc Elly at 10:07 AM