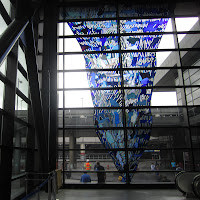 I’m back in Seattle after a trip that was a pleasurable experience whenever we weren’t flying, and a mostly horrible experience whenever we were in airports or on planes. One of the things I love about flying west is that for a few days I’m able to wake up with the birds, no alarm clock needed. As the “jet lag” wears off, I lapse back into my old habits of staying up late and sleeping late, but while my “morning person” is in charge, it’s wonderful.  This time, the other thing I loved about coming home was the weather. It was amazing to step outside and not experience sub-freezing temperatures. I often complain about the fact that temperatures in Seattle seem to be stuck between 40-70 F (about 5-20 C) degrees all year round, but after spending time in much colder places, 55 degrees (15 C) in mid-March seemed downright tropical.

I’ve spent the weekend catching up on orders and packing for the San Francisco Artisan Fragrance Salon. Today I shipped off two big FedEx boxes of stuff for the display, and more than 2 weeks worth of packages. It feels good to know that the basics are on their way to San Francisco and will be waiting for me at the hotel.

I kept notes during the last trip, and will reproduce some of them verbatim, but will try to build a coherent perfume-related theme around each segment. Today’s has to do with the challenge of packing for a 2-week trip using only a small carry-on bag, deciding which selection of perfumes to take, and the surprising consequence of living with “just” four fragrances for two weeks. 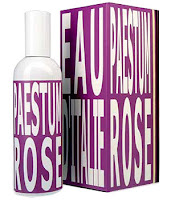 Tuesday, March 5: The house-sitter arrived last night and is installed in my studio, which is easily convertible to a fragrant guest room by rolling out a futon. I’m mostly packed. However, I woke up at dawn anyway just to take care of last-minute e-mails from students, make sure I have everything ready for the trip, and do some last-minute reading and preparation of talks I’m scheduled to give. Clothes are easy. I just throw a few changes of low-volume, semi-professional looking black items in my beat-up little carry-on bag and am good to go. The most important item is a nice black blazer that doesn’t wrinkle. With that, almost any outfit looks professional enough for my purposes, and it provides an extra layer of warmth if needed. I wear it under my leather jacket when flying, so it doesn’t even need to be packed.

The burning question is, “which perfumes shall I take with me?” The answer turned out to be four 1-ml sample vials, one almost empty, the others at least half full. I chose them because they were sitting in the box on my bathroom counter, within easy reach, and they’re ones that I like wearing, but different enough from each other to provide contrast. They are: Eau d’Italie Paestum Rose, Frederic Malle Musc Ravageur, Tommi Sooni II, and Olympic Orchids Siam Proun. Because I don’t use large amounts of perfume, tiny dabs from sample vials are more than enough for an extended trip. 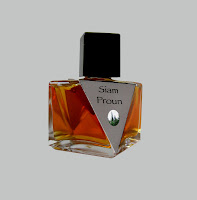 Siam Proun turned out to be my primary “meeting scent”. I usually use TDC Sel de Vetiver for that purpose, but decided to change it up a bit. In small amounts, Tommi Sooni II also worked well as a meeting scent. Both were a little more noticeable than what I usually choose, but were still within the range of fragrances that don’t slap people in the face with excessive sillage and/or oddly distracting notes. Musc Ravageur and Paestum Rose served as social occasion and leisure-time perfumes. Limited to these four perfumes, I developed a new appreciation for each of them, and a new relationship with them. Sometimes when I’m testing many different scents in rapid succession, interleaved with my own formulation activities, I tend to move too quickly from one to another, skipping over the details and failing to appreciate how long they actually last. The last two weeks were sort of like a retreat where people go to have intense interactions or meditate alone without any outside distractions. I bonded with my perfumes.

I really like the idea of a perfume retreat with just four favorites, including one of my own! In fact, I think I should engage in a perfume retreat periodically even if I’m not traveling. I know San Francisco is going to be perfume overload, but I'm excited to see what the second annual salon brings.