Plagued by snow wherever I go 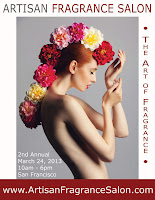 This morning I got up early to pack for the flight to San Francisco, and what was the first thing I saw? Snow! It’s on the ground, it’s on the trees, it’s coming down out of the sky, and it’s supposed to be spring. Ironically, it’s the first snow of the winter. It brings back recent memories of our 26-hour snow-plagued flight from Frankfurt to Totonto, which was going to be part 4 of the travel report. I’ll save that for the next post.

Before I go into details about that, however, I’d like to invite anyone in the San Francisco area to check out the Second Annual Artisan Fragrance Salon, which will take place on Sunday, March 24, at the Fort Mason Center Festival Pavillion at Fisherman’s Wharf. It’s in tandem with a chocolate show, so anyone coming to smell perfumes can also go to the other side and taste chocolates. It’s an opportunity to meet a lot of indie perfumers and smell their work, both old and new. I’ll be featuring six different, contrasting fragrances, ranging from an old standard to a new one that’s not yet been released.

I just hope it’s not snowing in San Francisco.