A CHOCOLATE PERFUME TO MAKE YOU SMILE 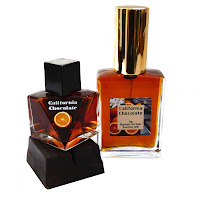 One spin-off of the recent San Francisco Artisan Fragrance Salon, held in conjunction with a big chocolate show, was the challenge I set myself to make a chocolate-themed fragrance for the event. Let me say up front that I generally don’t like chocolate in perfume, and don’t like working with chocolate as a perfume note, either. Ready-mix synthetic chocolate accords smell cloying, and cacao absolute is a bitch to work with, given its tendency to separate out from other materials. My one previous attempt to use chocolate in a fragrance ended up with my disposing of the result and going in an entirely different direction.

It was with some trepidation that I approached the task, but I do like challenges and didn’t want chocolate to get the best of me. I wanted to make something that was reminiscent of dark chocolate, but with a sunny, California twist, sort of like an orange liqueur cream filling. I started out with a yummy, not too sweet, dark cacao absolute, that I anchored with Bourbon vanilla and soft musk, and brightened with a little bit of patchouli.  The California citrus theme was represented by a mix of wild orange, grapefruit, neroli, yuzu, and white cognac notes.

It worked. The cacao somehow mysteriously merged into the mixture when I chilled and filtered it, resulting in a crystal-clear, luscious gourmand fragrance.

At the show, I featured five different fragrances in sniff glasses, one of which was California Chocolate. For those who aren’t familiar with this method of sampling, a sniff glass is a glass container, the inside of which has been sprayed with a fragrance. It is turned upside-down on a coaster or mat of some sort, keeping the fragrance trapped until it is lifted and sniffed. It works beautifully. One spray in the morning lasts all day. There’s no need for scent strips unless people want to take them with them to smell later.

As the day wore on, I became fascinated by people’s reactions when they smelled the California Chocolate sniff glass. For the other glasses there was a variety of reactions, from wrinkled noses and quick withdrawal to deep inhalations, to surprised or pleased looks. However, the reaction to California Chocolate was pretty much the same for everyone. They smiled! 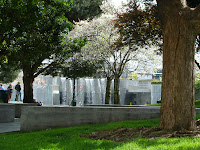 When people pick up a sniff glass (or strip), they are always tentative, apparently bracing themselves for the worst. As they sniff, you can see the expression on their face evolve, and you know exactly what they’re thinking. California Chocolate evidently came as a pleasant surprise to everyone who smelled it. A lot of people laughed out loud when they discovered what it was. Everyone, without exception, smiled. I have never seen a perfume make so many people laugh before, with good, spontaneous laughs of surprise to find that the perfume fit the image of what it was supposed to represent. I don’t think they were even really aware of their reactions. California Chocolate was the best-seller of the day.

Each time I watched, it made me smile to know that I could make other people smile with something as simple as a fragrance. Bringing happiness to people, even for a moment, makes it all seem like a worthwhile endeavor.

[The bottom image is my photo of Yerba Buena Park in San Francisco, a place that makes me happy just to look at it.]