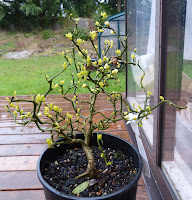 Somehow April has gotten away from me just as March did. After returning from San Francisco, spring quarter started, I had a big orchid show and sale last weekend, I’ve been trying to catch up on shipping orders out, I’ve got an orchid show and sale coming up in Portland in less than 2 weeks, and then there’s the Seattle Artisan Fragrance Salon the first week of May. I think I’ve mentioned before that it’s hard to get started back up blogging again after a hiatus, partly because I feel guilty about going for so long without a post and partly because I’ve skipped so much and can’t quite figure out where to begin again.

I’ve decided that it doesn’t matter where I begin, so will brag about the wonderful new plant that I found at the nursery where last weekend’s orchid show was held. It caught my eye as I was passing by on my way somewhere else. It was a small bonsai-like shrub or young tree with thick, convoluted branches, long thorns, no leaves, and small yellow flower buds everywhere. The trunk and branches were a beautiful green and silver striped pattern. I stopped to admire it, and discovered that it was something called Poncirus trifoliata ‘Flying Dragon’, also known as hardy bitter orange or Japanese bitter orange. During the two days of the show, I came back to visit it three or four times, and finally decided that it was coming home with me. 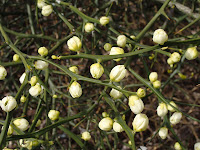 Flying Dragon is a dwarf cultivar, so probably won't grow to the height of a full-sized tree. It's now sitting on the back deck, waiting to decide whether it wants to be a bonsai or a garden tree. I’ve been reading a little about Poncirus trifoliata, also called trifoliate orange or Japanese bitter orange, which is native to China and Korea. It’s deciduous, and very hardy, reputedly growing successfully as far north as Boston. I don’t know why it’s not more commonly sold and grown here in the Pacific Northwest, where it seems we have the ideal climate for it. I learned that many commercial citrus trees are grafted onto Poncirus rootstocks, which are sturdier and more pest-resistant than those of commercial citrus trees. It sounds like a winner. 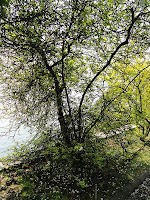 The flower buds that are just starting to open look like they’re going to be standard, white, citrus flowers. They’re supposed to be fragrant, so I’ll be checking every day to see how the fragrance develops. I’m looking forward to having a tree full of citrus blossoms that I can eventually harvest and use for enfleurage. The tree is also supposed to produce fruit, but that remains to be seen. It certainly has enough flowers to produce something!

[Top image is my photo of the plant in question; bottom two are different Poncirus trifoliata cultivars from Wikimedia]
Posted by Doc Elly at 10:09 PM