We’re back from Portland, so I’ve been dealing with the demands of my university job, an internet connection that was down most of yesterday, and the beginnings of panic about not being prepared for the Seattle Fragrance Salon on May 5.

The good news is that we survived the first orchid show in which we also displayed perfumes and, most importantly, survived driving in Portland. As soon as we crossed the bridge into the city, we saw a car with a bumper sticker that said “Keep Portland Weird”. It’s weird, all right, but probably not in the fun and funky way the bumper sticker people meant it. What’s weird is trying to navigate in a city where almost every street is one-way, the direction is randomly assorted rather than alternating, and there are very few functional signs indicating that streets are one-way. The standard “one way/do not enter” signs used at intersections elsewhere seem to be unheard of in Portland.

Whenever I’d visited Portland before, it was on the train from Seattle, then on public transportation around town. The times that we drove, we parked the car as soon as we arrived and took public transportation. That was simple. You just get on a bus or a tram and it takes you where you want to go. Easy enough.

Driving around Portland in a car jam-packed full of orchid plants, looking for an unfamiliar address, was a very different experience. The worst incident was when we turned onto an unmarked 4-lane street that looked as if it should be 2-way and found ourselves heading straight for an oncoming tram. I suppose people do this all the time because the tram driver and other oncoming cars saw us and slowed down to avoid a head-on collision, allowing us to not so gracefully find our way off of that street.

The orchid show was at a venue in the Convention Center-Rose Garden stadium district, a weird combination of hotels, motels, fast-food and stop-and-rob chains, an inordinate number of Starbucks (standing at one point we could see three!), and public buildings of all sizes. The good thing was that our hotel was only two blocks from the show venue. Setting up, we were a little uneasy about how perfume would be received at what is essentially an agricultural show. It was reassuring to see that some vendors were also selling bromeliads, begonias, and other non-orchid plants, and that there were framed orchid photographs and a few orchid-theme tchotchkes for sale as well. 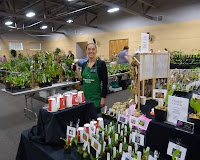 Before the public even came in we had exhibitors and organizers coming over to smell the perfumes. In the rush of packing I had forgotten to bring sniff glasses, so we made do with disposable coffee cups from the hotel. They actually worked quite well, providing just the right blue-collar touch to the display.  I had also forgotten to bring the Just Orchids discovery sets that I had set out the night before, but we did manage to bring a lot of individual small sprays and some soaps. By the end of the show we had sold out of the orchid-line sprays and had made a dent in the Devil Scents!

It was a very good show, both in terms of perfumes and in terms of orchids. From now on, the perfumes are coming to orchid shows. In Seattle, some orchids will come with me to the fragrance salon, to serve as props and to be given away at the end. I’m starting to really appreciate the crossover between the two domains.

[Portland landmark photos from Wikimedia]
Posted by Doc Elly at 8:07 AM