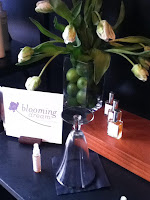 It was spring for a few days, and we all got spoiled. Then the cold and the rain came back again with a vengeance as bands of storms came through, darkening the sky and dropping the temperatures. It could be worse, mind you. When I say cold, I mean night and early morning temperatures in the low 40s F (5-10 C), not the snow that they’ve been having in places like Wisconsin, where I’m still waiting for the weather to warm up enough so that I can ship orchid plants safely. Some customers in the frozen north have been waiting patiently for their plants since December! 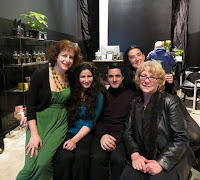 Last Saturday, after a short burst of rain and thunder, I headed to the April event in the Blackbird Northwest Perfumers Circuit. Featured perfumer Suzinn Weiss of Portland, Oregon, is a garden designer turned perfumer, so the transition from working with plants to working with fragrances seemed very familiar to me, and I was excited to smell what she had created. As I drove through the Seattle University District, I discovered that all the power was out, including the traffic lights, so the excessively polite Seattle drivers were all waiting at every corner of every intersection with no one moving. But Seattle driving habits are a topic for another day. 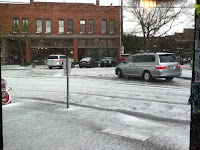 The lights were out all the way through Wallingford and into Fremont. As the lights came on again, I started noticing what looked like snow on the roofs and then on the grass. By the time I neared Ballard, there was deep slush on the road as well as everywhere else. I was not expecting snow in April! It turns out that what I saw was not snow, but an accumulation of hail from what people described as the longest, hardest hailstorm they had ever seen. It’s not unusual to get hail in Seattle in spring and fall, and it’s always the small variety, just a little bigger than sleet, usually quite localized. When it accumulates, it looks like snow. 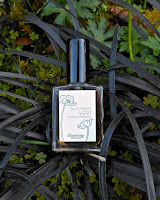 Despite the horrible weather, there was a good turnout at Blackbird, where we munched on chips and dips and enjoyed a variety of wines provided by Wine World & Spirits. Suzinn ‘s fragrances are all-natural and really are reminiscent of the subtle gardening smells of cut fresh branches, leaves, flower petals, and herbs. I think my favorite was Pink Rose, a scent that features three types of rose, fir, vetiver, and oud but doesn’t smell at all like floral rose. I also liked Drunken Flower, which features notes of rose and cognac. Her creation for Blackbird, Blackbird Vert, was a citrusy green scent to honor the newly unfurled tender green leaves of spring.

Suzinn's fragrances will be on sale at the Blackbird Apothecary in Ballard through May 11, and she will also be at the Seattle Artisan Fragrance Salon on May 5, so if you’re in Seattle and missed the Blackbird launch of her fragrance line, you can smell her perfumes at Blackbird during the coming month, or meet her in person and experience her creations first-hand at the salon.

[Photos by Kathleen Brennan, Christi Meshell, and Suzinn Weiss, grabbed from various Facebook pages. As usual, I got involved in talking and forgot to take photos.]