BLOOMING OUT OF SEASON 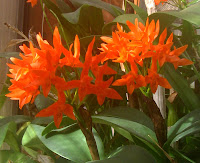 What’s going on with my orchids? Three of the big ones that normally bloom in winter are blooming now, completely the reverse of what I’ve come to expect. Cattleya aurantiaca has been blooming for weeks now, with two growths each bearing an uncountable number of bright orange flowers, and another growth about ready to pop out another spray of flowers. Unfortunately, this one is just colorful, not fragrant, so I’m only writing about it as a case study in blooming at the wrong time. 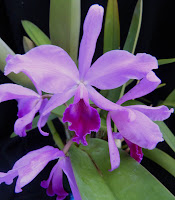 The second one to bloom is Cattleya jenmannii, with one growth in full bloom today with 4 big, delicate-looking flowers worthy of an old-style prom corsage. The plant has two more growths with different stages of developing buds. Cattleya jenmannii flowers are fragrant, so when I found the blooming plant in the greenhouse, I brought it inside.  I’m looking forward to the indolic, fruity-floral scent perfuming the house for the next few weeks. The third plant that’s ready to bloom is Lc Netrasiri, the iconic Red Cattleya of perfume fame, a plant that I’ve had for years and always thought of as a winter solstice bloomer. It’s just rammed out a huge stalk with at least 8 fat flower buds! These flowers will put on quite a display, both visually and fragrance-wise, once they open. 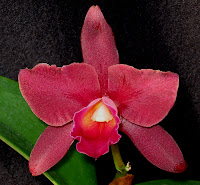 So why are all of these winter bloomers blooming in July? Could it be global climate change doing weird things to the orchids, making them think that they’ve moved from the northern to the southern hemisphere? That doesn’t seem likely, given that day length hasn’t changed, and I would think that would be one strong signal for orchids to bloom. It has been a little sunnier than usual this spring, but lots of sunlight doesn't send the right message to winter bloomers.

Another theory has to do with the fact that all of these plants are getting old and bulky, and consequently I can’t keep up with repotting them. As a result, most of the roots hang out of the pot. I have no idea why exposed roots would make cattleyas bloom out of season, but it’s a theory.

Another theory is that these plants have gotten so big that they can afford to bloom twice a year instead of just once, and will bloom again in winter. This would be the best possible explanation for their odd behavior. I guess I’ll just have to enjoy their summer blooming spree and wait till winter to see if they want to do it again in December.
Posted by Doc Elly at 2:50 PM