WE ALL MAKE STUPID MISTAKES 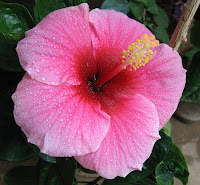 The title of this post says it all.  A few weeks ago, when I was mixing up a batch of Tropic of Capricorn, I reached for the maile vine-mango fruit tincture that I use to dilute the concentrate, but accidentally picked up a hibiscus flower tincture that I’d been saving for who knows what purpose. The bottle was the same, it looked roughly similar in color, and it was sitting on the shelf next to the tincture that I intended to use. I was in a hurry and didn’t discover the mistake until it was too late, when I looked at the label on the bottle and realized what I’d done.

It just stands to reason that if I were going to screw up on mixing a formula, it would be the one with the most expensive materials in it. That’s a lot of osmanthus, frangipani, jasmine, and other good things wasted. All those flowers that gave their lives to make the absolutes. I decided to go ahead and age and filter the stuff and see how it turned out. 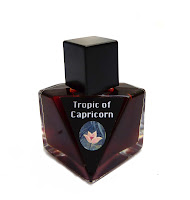 Actually, it’s not that much different from the real formula. It’s missing some of the warm, fruity nuances of the original, but is still a powerful tropical floral scent. What I have decided to do is bottle it and sell it at a bargain price, under a different name – Tropic of Capricorn Hibiscus - an accidental flanker, if you will. That makes me speculate about the origin of flankers. Were some of them formulas of the original that someone screwed up on?

It also made me think about a possible way to balance my insatiable drive to make more and more perfumes with the need to restrict my regular line to a manageable number of fragrances. The solution would be a series of single-batch perfumes that would be sold one at a time until that batch is gone, to then be replaced by another, different, single-batch formula. They would be hand-labeled, but possibly bottled in either super-basic bottles or special, fancy bottles. What I have in mind isn’t meant to be an “exclusive”, ridiculously-priced collector’s-item sort of thing, it would just be a fun art form, a way to share my noodling around in the lab with others, and a way to use small amounts of materials that I can’t be sure of getting more of on a regular basis in the foreseeable future.

Does the single-batch strategy seem like a good idea? Or does it just make the selection more complicated and overwhelming?