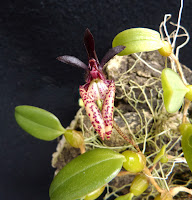 The Blackbird party on Saturday night was a huge success. Nicole, the owner, and Liz, her assistant, did an amazing job of decorating the place with all kinds of vegetation, flowering orchids, and bell-jars full of blackberries and hydrangea flowers. The perfumes were beautifully displayed, there was wine sponsored by Wine World, champagne, vodka, lots of snacks, and best of all a wonderful mix of people from the Seattle perfume community. It was a real pleasure to see those I’ve met before and to meet new people. I am dismayed that I forgot to bring my camera, and was too busy and distracted during the event to even think of using my phone to take some pictures. If anyone reading this has any photos, I would love to see them! Surely someone took a photo or two? Why is it that taking photos at social gatherings is always somewhere at the bottom of my priority list? I seem to be hopelessly bad at documenting events of this sort. 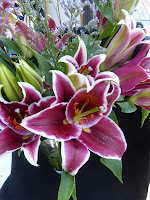 Last weekend was strange in a number of ways. Saturday night was the launch party at Blackbird, and Sunday was the memorial service for my mother-in-law who died about two weeks ago. There’s no need to go into details about that, but there is one spin-off that’s of interest from a perfume point of view. After the reception, several family members divided up a huge bouquet of roses and lilies that were still in bud. The poor flowers were sprinkled with little dabs of silver glitter. I suppose some florist felt a need to gild the lily. Because Michael’s sister doesn’t like the smell of lilies, she took the roses and I took all of the lily buds. In the car on the way home, I smelled something phenolic, very much like guaiacol. It was the lilies. I don’t know whether these lilies had been bred to eliminate the powerful floral smell that most lilies have, or whether they were just an odd variety, but the fragrance continues to be bizarre and phenolic even now that they’re opened up fully. They have a little bit of the normal floral smell, but it’s minimal.

If you haven’t ever smelled guaiacol (why on earth would you?) it has a slightly smoky phenolic-medicinal smell that’s quite disgusting in large amounts. Now I’m beginning to wonder if all lilies have this phenolic note, but that it’s usually masked by other things?  Could the phenolic note be the reason why some people dislike the smell of lilies so much? Have the breeders who seek to eliminate flowers’ fragrances inadvertently eliminated everything except the note that people dislike?

Another random observation is that the “voodoo lily” bulbs that were given to me last fall are finally sprouting. I have no idea what will develop, but it’s always a surprise to find plants that I had completely forgotten about showing up in the garden. 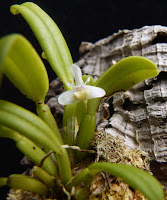 Two of my orchids are blooming for the first time, putting on a surprise flower display. The first is Bulbophyllum lasiochilum (photo at beginning of post), which has wonderful red-spotted flowers accented with dark red, and nearly black petals and sepals. It smells a lot like cloves, at least at this stage of flower development. The second surprise was a little Cadetia taylori (photo at left), with tiny white flowers only a few millimeters in diameter. The lip is yellow and fuzzy like velvet, the petals are thin and curved, looking exactly like an insect’s antennae, and the fragrance is a strong anise-like scent.
Posted by Doc Elly at 12:41 PM