Yesterday I was testing the sample of Strange Invisible Perfumes Musc Botanique that I got from the perfume shop, sitting at my work table and really getting into huffing the geranium and ambrette seed mixture. At some point it seemed to me that the sillage miraculously developed into the most wonderful thing that I had ever smelled, something that was indescribably sweet, powdery, musky, floral, and like nothing I had ever smelled before. I wrote an over-the-top review raving about how wonderful the sillage was, and how strange it was that it wasn’t detectable close to the skin. I was ready to go out and buy a full bottle of the stuff.

At some point during that rapturous experience, I had to go outside. Once I was out of the house, the scent reverted to a fairly simple ambrette, and the wonderful sillage was gone. When I went back in the house again, the rest of the scent came back and I realized that what I was smelling was a combination of the Musc Botanique and the fumes rising up from several batches of newly-made soap that were curing in the sun on a table in the back greenhouse room. I had to laugh and, of course, re-write my review. However, I have to say that the combination of everything at once was heavenly.

Another similar incident happened when I was at the meeting in Saint Louis. I had put on Sel de Vetiver that morning, but when I got to the meeting, I smelled sandalwood, a very nice sandalwood indeed, almost like the one in the original Samsara. At first I thought someone else in the room was wearing a perfume with lots of sandalwood, but at some point I realized that the smell was coming from my wrist. At that point I thought to myself how remarkable it is that Sel de Vetiver smells so different in a warmer, more humid climate. Then I realized that the sandalwood smell was coming from my left wrist, in the vicinity of my plastic watchband. Apparently one of the experimental mixtures that I had applied a couple of days before had gotten under my watchband and been soaked up by the plastic. I think I know which one it was and when it happened. Weeks later the watch still smells vaguely like sandalwood. Amazing. 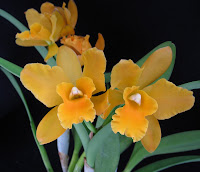 Have you had an experience where you thought you were smelling your perfume but it turned out to be something else? Write a comment about it, and you will be entered in a drawing to win a 5 ml bottle of Golden Cattleya perfume, the newest addition to the Orchid Scents line. If you’re in the US, I’ll also include a full-size Golden Cattleya soap, one of the ones that was drying yesterday. The drawing will be on Saturday, August 28.
Posted by Doc Elly at 6:36 AM