THE ORCHIDS OF AUGUST: CATTLEYA BICOLOR AND LAELIA LUCASIANA 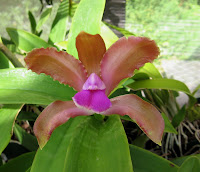 Two of these beauties are blooming in my greenhouse this month and, although they are the same species, you wouldn’t know it by looking at them. The name bicolor refers to the fact that the lip is a very different color from the petals and sepals. Both of the plants have a spade-shaped neon magenta lip, but that’s where the resemblance ends. One of the plants has wide, bronze colored petals and sepals. Yesterday it smelled like pure indole, but today the indole is fairly well masked by the addition of a sweet, spicy, slightly powdery scent. Lovely. 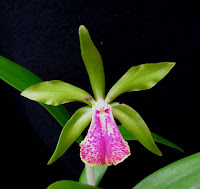 The other plant has narrow, bright lime green petals and sepals and has no scent as far as I can tell. The contrasting colors of this flower truly make it live up to the bicolor name, but it’s disappointing that it’s not fragrant. I suspect that selective breeding for the green color has eliminated the fragrance, which is generally considered unimportant in orchid judging at shows.

I think many orchid breeders concentrate on the appearance of the flowers and don’t consider fragrance at all. One of the reasons that I like to grow wild-type orchid species is that they are likely to be fragrant, even though they may not be as big and showy as their selectively bred counterparts. They also tend to be hardier than the ones that have been overly manipulated to select for characteristics that humans, as overly visual creatures, find desirable. 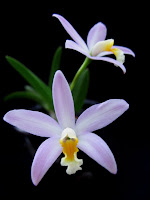 This little cutie is one of my all-time favorites. It belongs to a group of Brazilian orchids that grow on rocks under extreme conditions, and for that reason is referred to as a rupiculous (rock-growing) Laelia. The plant itself is less than 6 inches high, the leaves and pseudobulbs are fat and succulent, and it just loves to bloom. This is the second time it’s bloomed this year. The first time it had two flowers, this time it has four. They’re much brighter in color than the spring flowers were, illustrating the influence that growing conditions can have on the appearance of orchid flowers. The fragrance is the same as before, but this time it seems stronger, probably because of the warmer weather. The flowers have a unique fragrance that's sort of like violets, iris, suede, a note that's vaguely fruity, and black pepper, smooth on the one hand and piquant-spicy on the other. I plan to make a perfume based on this scent. The challenge is going to be to get the black pepper top note pumped up enough to mimic what I smell in the flowers. They do it so well, and keep pumping it out all day. Right now the plant is sitting on my desk as I write, and I keep inhaling the fragrance to try to commit it to memory so that I can in some way reproduce it.
Posted by Doc Elly at 7:52 AM