THE MYTH OF ETERNAL GROWTH 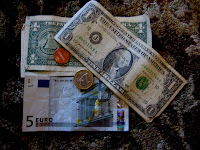 This morning I was reading a news article bemoaning the fact that the US economy is not growing fast enough. According to this report, the annual growth rate was “only” 5% last year, and is less this year. Pardon me if I think like a biologist, but why should anything, including the economy, be expected to grow indefinitely? Why not try to attain a state of stability in which individuals or individual enterprises can grow (and eventually go to the great perfume shop in the sky), but the whole stays the same size? Isn’t that how living organisms and ecosystems work? Once we are adults, our skin keeps growing new cells as old ones die and are washed down the drain, but the size of our skin doesn’t increase (unless, of course, the goal is to become morbidly obese, in which case the skin must expand to cover the excess flesh). What happens if cells in any part of our body grow unchecked? I think everyone knows the answer to that question. It’s called cancer.

Do we really want an economy that grows according to the cancer model? It may be a healthy model from the tumor’s point of view, but eventually it will end up killing its host. The current economic woes may well be society’s way of trying to find a state of equilibrium in a world where growth cannot continue unchecked. I think of it in terms of human society finally having reached adulthood (or at least adolescence), a state in which additional growth is counterproductive. If that is the case, then the main activity should be maintenance, improvement in the quality of what exists, and replacement of whatever elements are lost through normal attrition, not unchecked growth.

Of course, it could be argued that increasing the world’s population would increase consumption and lead to economic growth. However, unless we intend to expand our economy to new planets, we are dealing with limited resources. This world can only sustain a limited number of people in the style to which they are accustomed. Another way to increase consumption is to destroy existing goods and make new ones to replace them. Wars and natural disasters are one way to accomplish this, production of shoddy goods and planned obsolescence another. I don’t think any of these solutions are very palatable to the people who have to suffer their consequences. It seems to me that it’s time for some of the economists and politicians to take a look at designing a zero-net growth policy that would obviously still allow for growth and decline within the system.

I know, I’m on my curmudgeonly soapbox again, but this whole obsession with the sacred cow of economic growth and complete disregard for alternative models is something that I find deeply troubling. What does this have to do with perfume? Not much really, but anything can be related to anything else if you try hard enough. When I first started making perfume, I bought materials at a fast rate, stocking my perfume organ with all manner of goodies and some not-so-goodies. I’ve now reached a point where the acquisition has slowed down considerably (an economic downturn, if you will), but I still have a wonderful and highly functional perfume-making setup that is far better than it was during its rapid growth phase. I use the existing materials in making perfumes, gradually deplete my supply, and replace that particular item. Zero net growth. Some materials I discover to be of poor quality and pour them into my millefleurs jar (aka waste jar) or give them away. I then replace them with a better version, or with something else entirely. Zero net growth. I have only so much room in my work area, so continuing to grow my “perfume-materials economy” indefinitely would quickly become counterproductive since I wouldn’t even be able to get into the space. Given my current “world” and its resources, the zero-growth (or minimal-growth) model works just fine. I just wish someone would consider it as a model for local, national, and world economies.
Posted by Doc Elly at 12:47 PM