SALAMANCA: WEDDINGS AND THE CITY 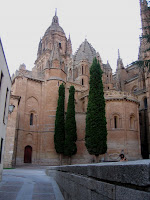 The heat of the first two days has subsided, and it was almost cool this morning when I set out to run some errands and work with colleagues at the university. The town has changed very little since the last time I was here two or three years ago. A few shops have come and gone, a few old buildings are being propped up and renovated, and a big vacant lot that was always full of dead grass and thistles has been paved over and turned into a public square. I liked the vacant lot better because it brought a little nature into the city. All of the monumental buildings are the same - the cathedral and medieval university buildings with their musty interiors, and all of the old residential/commercial buildings that have the original facades but are completely modern inside - new buildings with old masks covering them. It seems odd that there is very little scent of incense or candle wax in the cathedral, just the smell of stone and old wood.

There aren’t as many tourists around as there usually are at this time of year, presumably because of the economy. However the local people are as active as ever, especially in the evening after the hottest part of the day. Quite a few people wear perfume, more than in Seattle, and the perfume is generally better. I get whiffs of D&G Light Blue and such, but I also get whiffs of really interesting sillage. What I haven’t smelled are the overpoweringly strong hair conditioner-type scents that the students in Seattle like to use. I checked out the perfume selection in Sephora, and it’s not much different from the Sephora in Seattle except that one of the sales girls followed me around breathing over my shoulder, as if she were deathly afraid that I’d make off with one of her precious bottles of Light Blue. A long and disapproving stare caused her to back off a couple of paces, but that sort of behavior eliminates any possibility that I would ever buy anything from that shop. 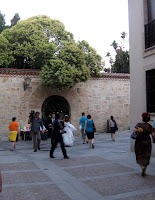 This is wedding season, so there are weddings every Friday and Saturday afternoon. People go all out for weddings here, so it’s quite a sight to see the guests dressed in their fancy clothes. The highlight of one of Friday afternoon’s weddings was a young man dressed in a shiny gold suit, complete with gold shoes. At one of Saturday’s weddings there was a man with a shiny silver suit. The women are even more colorful, with bright shawls, stiletto heels, ruffled skirts, and flowers in their hair. In the evening we walked around one of my favorite places in Salamanca, the Jardin de Calixto y Melibea, a small oasis-like park perched on the corner of a cliff above the river. A beautiful bride and groom arrived to have photos taken. Later, when we walked down to the bridge to watch the bats, the same couple followed us down there for more photos. Spanish weddings are wonderful! I love the fact that people go all-out in dressing up and celebrating. There’s too little of that in the world.
Posted by Doc Elly at 9:46 AM