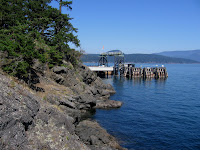 Just off the Washington coast is a network of small islands called the San Juans. One of these, Lopez Island, is where we spent our honeymoon ten years ago, and where we just spent a hot and sunny weekend combining business with pleasure and celebrating our anniversary. M had a gig playing music for a friend’s birthday bash, so we had double reason for revisiting this beautiful, quiet corner of the world, which is as about as close as you can come to the Shire in the Lord of the Rings. 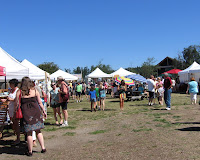 I can’t even begin to describe how beautiful the approach to the island is, with rocky cliffs covered with madrone trees, junipers and other evergreens. We arrived at the Lopez Community Center in the morning to find that there was a “farmers’ market” nearby. It turned out that there was only one booth selling produce, just vegetables, no fruit, but there were dozens of craft stands. I love craft fairs, so wasn’t too disappointed by the lack of produce. 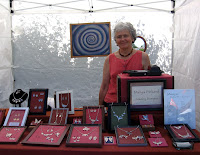 Most of the stalls were selling the usual beads, beach glass trinkets, unremarkable pottery, bad paintings, overpriced knitted items, and snacks. However, two stalls stood out to me. The first one that I spent some time with was Manya Pickard, a talented silver worker based in Friday Harbor, on a nearby island. I liked almost all of her work, and ended up buying a pair of earrings in a design that she calls Alhambra. 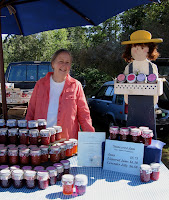 The second stall that impressed me was Stonecrest Farm, operated by Susan Corbin, who makes jams and jellies with fruit grown on Lopez Island. She let me taste all of her creations, including rhubarb jam (tasty, but too sweet), apricot-rum preserves (yummy!) and plain apricot preserves. I was surprised to find that I liked the plain apricot better than the one with rum. The rum flavor masks the wonderful floral note that’s in the apricots that Susan uses. Sometimes less is more, a principle that most definitely applies to perfumery as well as jam-making. After I had chosen the jar of apricot preserves, I saw that she had a few jars of lavender jelly. Lavender is one of the things that grows in yards and on farms all over Lopez Island, so I would catch a whiff of it at various times throughout the day. According to Susan, she first makes a tea by steeping the lavender flowers in hot water. The process extracts not only the flavor and fragrance, but also the color so that when the flowers are removed they are almost white. She then adds sugar and pectin to make jelly. I tried it, and it really does taste like lavender. It’s also lavender in color. How could I resist buying a jar?

I’ll spare you the details of the party and the music performance, but suffice it to say that the food was delicious and plentiful and the music had everyone up dancing. That night we camped in the back yard under a sky that was crystal clear, with every star showing in crisp detail. The milky way appeared in the most spectacular detail that I’ve seen since I was on a deserted beach on a clear night in Australia years ago, far from any city lights. An added bonus was that we saw shooting stars from time to time, the tail end of the Perseid meteor shower. What a view! 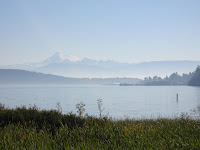 Today, after a leisurely breakfast, we headed to the ferry. Sunday afternoons are the most crowded time, but we used the wait to have a picnic on the cliffs overlooking the water, with a view of snow-capped Mount Baker in the distance. To complete the weekend, on the ferry trip home we passed by a group of at least 20 orca whales who were playing, jumping up out of the water. The ferry captain slowed down almost to a stop so that we could watch them. It was the perfect anniversary trip.

Here's a pic of the earrings that I got from Manya. You can see more of her work at http:www.manya.net.
Posted by Doc Elly at 10:38 AM