It would seem frivolous to write about perfume today when the news is all about the terrible earthquake in Japan and its consequences. This morning, the estimates of how many people have already died vary from 100 to as high as 10 thousand, a mind-boggling figure. The bottom line clearly is that no one knows how many have died. Every news article that I read fills me with a sense of horror at the magnitude of the disaster. My sympathy goes out to everyone who has lost loved ones. Property can eventually be restored, but individuals cannot.

For those of us safe in our thin cocoons of modern civilization, the events in Japan should serve as a reminder of how fragile life is, and how fragile our entire infrastructure is in the face of raw nature. Maybe this hits closer to home for me than for some because I know that out in the ocean not too far from where I live is a fault exactly like the one in Japan, just on the other side of the Pacific. It could have happened here. 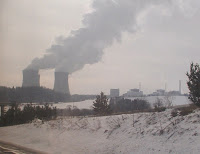 As destructive as the quake and tsunami were, the consequences appear to be ongoing. To supply the insatiable desire for energy consumption, Japan has built 55 nuclear power plants - another mind-boggling number given the small size of the country and the potential hazards of this technology. Even in the best of times there is a problem with how to dispose of the waste, which remains strongly radioactive for many generations after the power plant has served its life span. No one really has a good plan for disposal, but I suppose it’s not really considered a cause for concern if it doesn’t cause obvious problems within the lifetime of the engineers who designed the systems. Let future generations deal with it, unless an earthquake hits. It’s only then, when there’s an immediate problem, that people become aware of the real price they might have to pay for all of the comforts and conveniences to which they’re accustomed.

The nuclear meltdown that seems to be in progress in Japan is just one example of the ways in which human activities interact with nature to magnify the scope of a disaster and call attention to hazards about which most people are in a constant state of denial. The sad thing is that spills of radioactivity from nuclear power plants and manufacturing of nuclear weapons, oil spills, general trashing of the environment, and floods or droughts caused by human activity are all potentially avoidable, but no one who has the power to do so wants to take responsibility for preventing them. Maybe it’s too late anyway, so all we can do is fiddle while Rome burns.

I know this is a downer post, but I tend to get depressed about these things, and all I can do is try to live my own life in a reasonable way - and write.